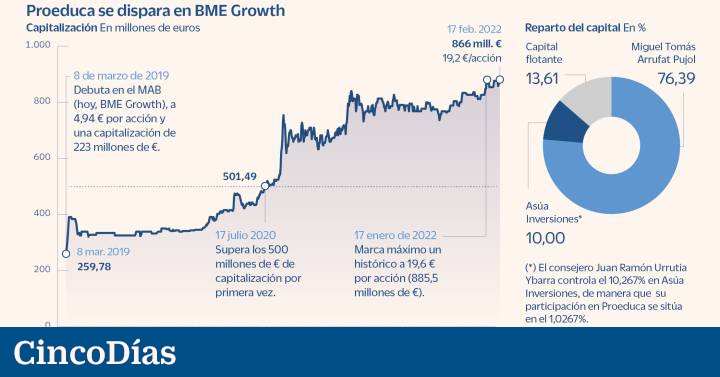 Proeduca, the group that owns the International University of La Rioja (UNIR), is preparing to make the leap to the regulated market. The company, controlled by Miguel Tomás Arrufat Pujol with 76.4% of the capital, debuted in March 2019 on BME Growth (previously called MAB) and, since then, has quadrupled its capitalization, which is close to 900 million, one step away from the 1,000 million that would require him to hit the market up button.

The educational sector in Spain has been the target of foreign venture capital, which already has in its possession the European University of Madrid (acquired by Permira in 2018 for 770 million) and the Alfonso X el Sabio, bought the following year by CVC for 1,100 millions. Proeduca, meanwhile, is approaching the limit valuations to be listed on the BME multilateral platform, after closing yesterday with a capitalization of 866 million euros. Financial sources point out that the group is also under the radar of venture capital. Its powerful results are a powerful attraction for this type of investor. However, that desire has not materialized in any movement. The free-float (freely traded company capital) is low at just 13.6%.

Experts point out that the outbreak of Covid-19 was its great catalyst in the market, but it has been shown that the end of the toughest restrictions has not been a problem for its business model.

In addition to its star asset, UNIR, Proeduca has activities in Mexico, controls Cunimad, a center attached to the University of Alcalá, also has the Neumann Business School postgraduate school and participates in the United States through Marconi International University. In the last financial year, the company obtained 63% of its sales in Spain; it achieved the rest abroad, with special weight from Latin America, with 25%.

Until the end of 2020, the regulations required that companies that maintained a capitalization of more than 500 million for a continuous period of more than six months in the SME growth market had to apply for admission to trading on a regulated market within nine months.

The Ministry of Economic Affairs modified that point to raise the threshold to 1,000 million euros. If this change had not occurred, Proeduca should already be listed on the BME large stock market.

The news is that, despite everything, the company is about to reach the new limit. But he is not in a hurry, he will wait for it to be mandatory. Rubén Stein, president of Proeduca, points out that “the company does not have a different plan than to scrupulously comply with what the law establishes in terms of capitalization limits to jump into the continuous market.”