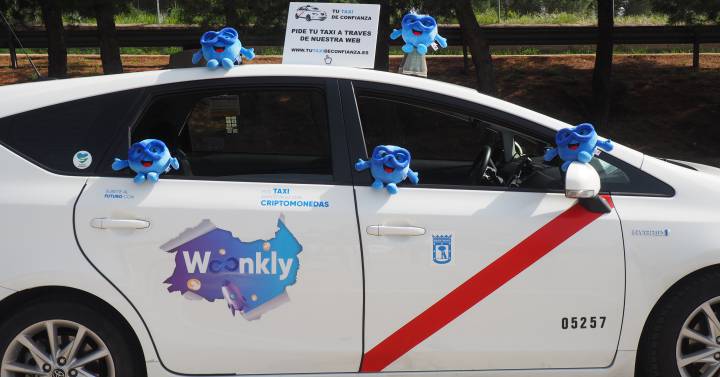 Technology continues to advance in transportation, and taxis are not far behind. The sector has been incorporating novelties for some time to modernize its service and thus offer the user an increasingly better experience, also digital. The company Tutaxideconfianza and the Spanish startup Woonkly have reached an agreement so that travelers can pay for races in Madrid with cryptocurrencies. Thus, since this month of May, the taxi fleet accepts both conventional payments and the use of virtual currencies.

The people of Madrid and all the travelers who are in the capital of Spain can now take a taxi and pay for the journey with different cryptocurrencies, through the website www.tutaxideconfianza.es, expanding the possibilities for users. By bizum, through PayPal, by card, with euros and now also with such famous currencies as Bitcoin, Ethereum, WOOP, Binance Coin or Cardano, among others. In addition, through the aforementioned online page, it is also possible to obtain a fixed price for the route.

Woonkly, a Venture Builder (creator of startups) of projects based on blockchain that seeks to be at the forefront of technology and adapt to the pulse that citizens impose, helps the taxi sector with this alliance to reduce the margin with the competition “offering totally new options for passengers in the city of Madrid”.

Travelers who are in the capital will be able to pay with Bitcoin, Ethereum or Cardano

Paying with cryptocurrencies in taxis is a novelty in Spain. Until now, this payment method had been adopted in other countries such as the United Kingdom or Scandinavia. Now, Madrid stands as a pioneer city in the Spanish territory.

The CEO of Woonkly, Daniel Santos, celebrates that “the technological vanguard, cryptocurrencies and a transport system so integrated into Spanish culture take this versatile step.”

In his opinion, “that travelers have the possibility of paying with cryptocurrencies is not only opening a window to the crypto world, but also being aware that society has begun to integrate virtual currency into their daily lives.” And he adds: “it is one more step that consolidates the technology blockchain. This union between the world of taxi and Woonkly is a very important step and one for which we will work to provide the best service to customers”.

Through the platform, a service is offered for people with reduced mobility in fully conditioned, disinfected vehicles, with the possibility of reserving vehicles for family or friends and they can even ask the driver not to resume their journey until the client has entered the place. of destiny.

Cryptocurrencies are payment instruments based on innovative technologies —the blockchain or blockchain—allow purchases, sales, and other financial transactions. These types of assets are booming because in a short time they have multiplied their value. They are not touched with the hands nor can they be carried in a pocket, but they are available to anyone through different applications that can be downloaded to the mobile.

Of course, it is a market with some risk. The Bank of Spain highlights its volatility “and its lack of control by any government, central bank or financial institution.

Operations. 12% of Spanish adults, the majority between 18 and 24 years old, have virtual currencies, which makes Spain the fifth European country with the highest number of operations in cryptocurrencies, according to the strategy director of the Cybersecurity Agency of the Generalitat of Catalonia, Tomàs Roy. “The cryptocurrency sector moved in Spain in 2021 about 60,000 million euros, a figure that represents almost 5% of the country’s GDP.”

Monetary streaming. The company Mean DAO, integrated in the platform of blockchain Solana, will make it possible as of this year for cryptocurrency users to manage any type of subscription “paying only for the time of use and measured to the second.” In this way, a person will not have to pay for Netflix or any other subscription service even if they do not use it, but will only pay for the time from when they enter the streaming until it comes out, explains co-founder and CEO Michel Triana. Mean DAO, a DeFi (decentralized finance) company, the equivalent in the world blockchain and from cryptocurrencies to a company fintechthe startup of the finance sector in the digital model, it was created a year ago but launched its first products in September 2021. It has already raised 8.5 million dollars from venture capital institutions, including SoftBank, and individual investors. This allows them to continue advancing in a project that some specialized media have described as the “Spotify of money”.