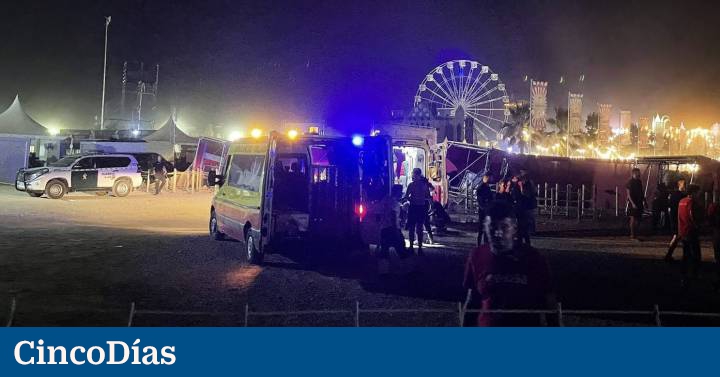 One person has died and 17 more have been injured of varying degrees, three of them with serious polytrauma, when part of the stage of the Medusa festival held in Cullera (Valencia) collapsed, as a result of a strong gust of wind, according to the 112 GVA.

The incident occurred around 4:18 a.m. this Saturday. Until the scene, the Emergency Information and Coordination Center (CICU) has moved several medical vehicles.

Of the 17 injured, who have been transferred to various hospitals, three have serious injuries and 14 minor bruises. In addition, there have also been 40 people evacuated.

The organization of the festival has confirmed in a statement that due to inclement weather its activity has been temporarily suspended and the venue has been evacuated as a preventive measure to facilitate the work of the festival’s emergency and security services.

According to the State Meteorological Agency (Aemet), during the night there have been so-called “warm blowouts” with very strong gusts of wind and sudden rises in temperature in parts of the Valencian Community. This phenomenon has caused that, in the case of the Alicante-Elche airport, it has reached 40.5 degrees at 3:00 a.m., with a wind speed of 82 km/h.

The Medusa Festival has issued a statement this Saturday in which it points to a “meteorological phenomenon of devastating characteristics” that caused damage to the infrastructure of the stage as the origin of the accident.

From the direction of the festival they are “completely devastated and dismayed” at what happened in the Cullera (Valencia) venue and express their “deep and sincere condolences” to family and friends affected by the accident.

The 17 people who have been injured have been transferred to hospitals in Gandia, Alzira, La Fe and Clinico, the latter two in the Valencian capital.