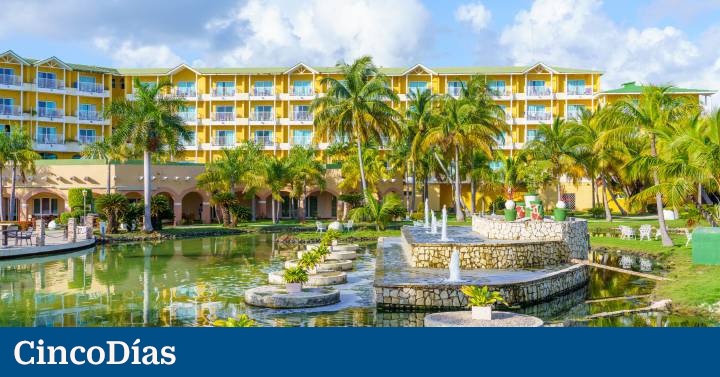 The price of Meliá Hotels has been drawing a roller coaster for some time. In the middle of the summer season, it has managed to refloat and return to being positive in the year with a gain of 3.2%. On the part of the analysts there is confidence that the stock will stabilize, and even that it will take the upward path. Recommendations are mainly divided between buy (62% of the total) and hold (28.6%), according to the Bloomberg consensus. The upside potential exceeds 22% on an average price target of 7.9 euros, between 10 for CaixaBank BPI and 6 for Bestinver.

Divacons-Alphavalue entitled “The dawn is yet to come” its latest analysis of the hotel chain. The phrase responds to the vision of the firm after the presentation of the results of the first half of Meliá, where it achieved the first net profit since the start of the pandemic. He won 3 million euros, mainly for what he has called “revenge trips”, so qualified by the outstanding reaction of tourists to the restrictions experienced worldwide by Covid. With this, the company has reaffirmed its estimates for the year as a whole of an EBITDA of 400 million euros.

The figures for the second quarter were notably better than those of the first, highlighting last-minute reservations and the recovery of MICE trips (business tourism, incentive trips, conferences and exhibitions). “In the post-pandemic world, business in Spanish cities should be supported by the recovery in the number of incoming travelers to Barcelona and the strong recurrent trade fair calendar in Madrid,” explains Divacons Alphavalue. “We hope that the momentum of the resorts will resume, although in the case of Spain they could be affected by cheaper alternative destinations as a result of inflation,” adds the firm.

Bankinter had Meliá’s board in neutral a month ago and has just raised it to buy “given the strong capacity to rise in hotel prices, which will make it possible to largely offset the increase in costs.” The bank expects this trend “to extend at least in the coming months.”

Intermoney Valores agrees on the positive outlook for the short term: “During the third quarter we see no problem in maintaining or even increasing prices.” But he pays attention from the last quarter: “In 2023 the problems could begin, especially if we do not see a significant reduction in debt.”

Leverage is the main shadow that analysts observe about Meliá; in the first semester it stood at 1,330 million, with a negative impact due to the appreciation of the dollar against the euro.

The management hopes to reduce the debt by around 250 million and has announced that it will carry out a divestment before the end of 2022. Intermoney Valores expects it to be “in assets in the Caribbean” and stresses that “the activity in that area will allow them to sell without any type of discount with respect to the valuation of 2018, as it happened with the sale of establishments in Spain in June 2021”.

On the other hand, Bank of America highlights that most hotel groups have solid balance sheets and liquidity, but at Meliá it notes that leverage remains high. “The forecast of a good summer season together with Easter could help generate cash and begin to reduce debt,” he points out.

Meanwhile, Iván San Félix, from Renta 4, believes that “the recent weak behavior of the titles is due to very negative business expectations that do not correspond to the environment that the board discounts for the coming months.” Victoria Torre, director of digital offerings and corporate communication at Singular Bank, agrees that “there is still room for value recovery if we do not attend new disruptive events.”

Evolution. Meliá Hotels exceeded 8 euros last May, a level enjoyed by the price before the start of the pandemic. With the subsequent weakness, it lost it, but the balance since the lows of the health crisis is still very notable, with a revaluation of over 130%. Its capitalization reaches 1,400 million euros, and that of NH Hoteles, 1,500 million.

short positions. The company, present on the Spanish Stock Exchange since 1996, is once again under pressure from the most speculative investors. According to the CNMV registry, Eleva Capital SAS reported a short position equivalent to 0.51% of its capital at the beginning of July.

Dividend. The hotel chain suspended the distribution of dividends in 2020 as a result of the impact of Covid-19 on the business. Most analysts expect it to resume payment no earlier than 2024. Divacons Alphavalue puts it at €0.17 per share, and the coupon yield by then at 2.84%.