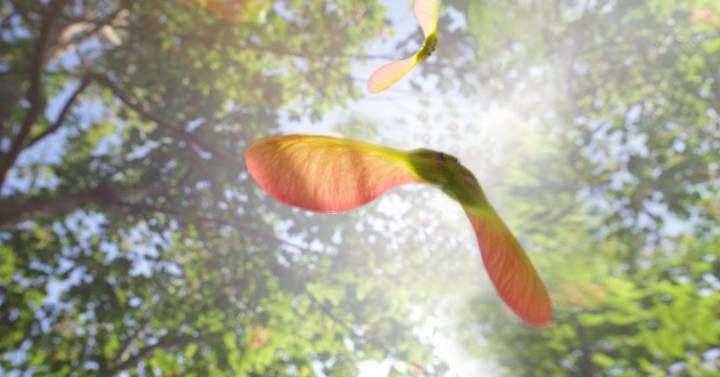 Inspired by maple seeds, a scientific team has designed a small new two-winged drone, or bicopter, that moves using much less energy than four-winged vehicles of similar weight.

The description of this 35.1-gram device is published in the journal Science Robotics and its managers are robotics experts from the City University of Hong Kong.

Songnan Bai and his team looked to the samara seeds of Japanese maple (with the outer part extended like a wing) for their development to optimize the aerodynamic design of their new micro-air vehicle. Maple seed pods are well known for their helicopter-like design. Falling from the tree, they spin like the rotor of an unpowered helicopter, increasing their distance from the tree as they get farther away.

In this new effort, the researchers sought to harness the efficiency inherent in the structure of the maple seed pod to increase the flight time of the tiny drones. To do this, they built a small drone that can spin like a maple seed pod to stay in the air. The resulting drone could fly for almost twice as long as those with a traditional four-rotor design.

They need seemingly disproportionate amounts of energy to spin their centimeter-scale propellers fast enough to generate the force needed to fly, a journal summary details.

In addition, these aerial vehicles tend to have less momentum or have fewer engines on board in relation to the number of movements that the small drone can perform.

All of these factors limit the usefulness of micro-aerial drones in situations such as mapping and surveillance operations. Now, Bai and his team have designed a model that addresses these limitations through its shape and gyroscopic movement.

The vehicle is based on the structure and movement of the samara seed, with two wings that rotate in a way that reduces power consumption and overcomes lack of actuation.

In tests, this bicopter – which weighs 35.1 grams – hovered for more than 24 minutes powered by a small 650 milliamp hour battery.

The researchers also tested the drone’s ability to carry a small payload, including a camera. As the camera rotates with the drone, they synchronized their frame rate to match the drone’s rate of rotation, resulting in a somewhat shaky but usable video feed.

They also demonstrated their ability to carry a 21.5-gram device for mapping and surveillance operations.

“The most exciting thing about this study is the vast improvement in the robot’s endurance. Relative to other lightweight robots weighing less than 100 grams, the rotary-wing robot roughly doubles the flight time,” says Pakpong Chirarattananon, another of the study’s authors.

better maintenance. The growing energy demand has led many countries to strengthen their renewable energy sources by betting on drones to improve infrastructure maintenance. Due to this technological need, the Spanish company Aerocamaras has developed a system of technical inspections of wind farms with drones with which they already operate both nationally and internationally, highlighting their presence in Latin America.

wind parks. The Galician firm’s drones fly over wind farms in Portugal, Italy and Mexico and, in the coming months, will begin operating in Puerto Rico, Chile and Brazil. These services, which are carried out by certified professional pilots from Aerocamaras, represent a technology that aspires to be essential in the maintenance of infrastructures around the world and that has already been put into practice in Spain.

Advantages. The multi-rotors allow the verification of the structure’s condition in an efficient and safe way, as well as quickly detect faults and rule out false alerts without the need for exposing employees to unnecessary danger. The system allows lower costs while inspecting large surfaces in record time, facilitating access to complicated areas and detailing the state of the structure thanks to the different kinds of measurements.