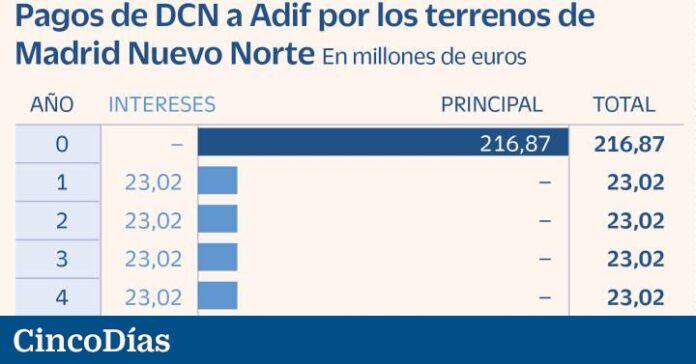 Last milestone to kick off Madrid New North. In the next few days it is expected that the promoter company Castellana Norte District (DCN) sign together with the Madrid City Council, the regional government and Adif known as the framework agreement. This is the last step that will allow the company to buy the land from the railway administrator for 1,245 million euros and then begin the urbanization process.

The agreement is already finalized and ready to sign, according to different sources familiar with the process. Initially, its signature was considered between March and April, but it was postponed due to the 4M electoral call for the Madrid Assembly. Currently, the different parties are waiting for you to Isabel Diaz Ayuso, regional president, form your new Executive to set a date for the act. It is foreseeable that it can be signed at the end of this month or the beginning of July.

This document is the infrastructure agreement that includes the actions that the Administrations and DCN must undertake in different aspects such as the Chamartín station, the tracks, in terms of transport with respect to the metro, suburban, the canalization of the Canal de Isabel II or roads, among others.

Likewise, the city council, the Community of Madrid, DCN and Adif have agreed to create a technical monitoring commission, in which the four parties will be represented to monitor the correct progress of the infrastructures and that the respective obligations are fulfilled.

At the moment the document is signed, DCN will exercise its historical right to purchase the Adif land, an agreement that goes back to the nineties although later it was renegotiated. The railway administrator, chaired by Isabel Pardo de Vera, is the main owner of the land in that area north of the capital, a macro-development formerly known as Operation Chamartín. The promoter will pay Adif 984 million plus 261 million interest in 20 years, according to the agreement reached by the two parties.

In fact, almost immediately DCN will disburse the 216 million of the first payment (see graph) in a calendar that will be extended in this way until 2041. With these resources, the Ministry of Transport, Mobility and Urban Agenda and Adif will be able to assume part of the cost of the reform of the Chamartín-Clara Campoamor station, a work that can reach 1,000 million in investment and for which currently an international architecture competition has been called.

Beyond the resources that Adif will receive, the signing of the infrastructure agreement represents the last step to kick off an operation that was conceived in 1993 and that political divergences and periods of crisis have delayed and redesigned.

From that moment of the signing, the management commissions that result in the compensation boards (body that groups the owners of the land) of the three areas to be developed can begin to be formed: Las Tablas Oeste; Malmea-San Roque-Tres Olivos and Chamartín Business Center.

The compensation boards will have the task of executing the urbanization works and the reparcelling of the land. These works could begin as early as 2021. As the owner of the land, DCN will have a majority in the boards of the business center area (the future financial city of Madrid) and in Las Tablas and, in turn, will be in a minority in the development of the Fuencarral neighborhood. DCN has as shareholders BBVA (75.54% of the capital), the Socimi Merlin (14.46%) and San José Group (10%).

In the new neighborhood, 10,400 homes will be built, of which 20% will be public protection. An investment figure in urbanization and infrastructure is expected to exceed 5,000 million. In addition, what will be the city of Madrid offices next to the station.

The project involves, in addition to the reform of the station, the construction of a transport interchange connected to Chamartín, three new metro stops and an additional commuter station in the Fuencarral district, as well as the expansion of the North and North nodes. Fuencarral of highways.

“We must re-educate our people: the RIC is not a problem, but the solution for the Canary Islands”