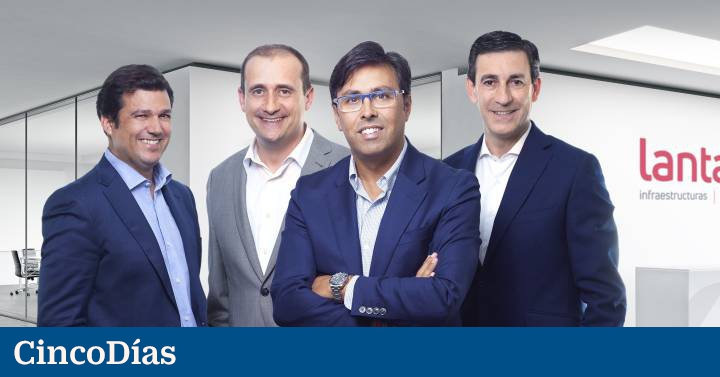 It has jumped from 59 million in revenue in 2018 to 254 million declared at the end of 2021and the infrastructure firm Lantania the challenge of being over 500 million turnover in 2026. Unlisted construction companies such as Aldesa and Comsa.

The group that presides Federico Avila has presented a new five-year strategic plan, drawn up with the advice of HEY, and insists on diversification and the search for greater profitability. As a starting point, the company born from some of the businesses of the old isolux Last year, it achieved an EBITDA of 15.7 million, it plans to rise to 16.4 million in 2022, and reach 25 million in 2026. “Lantania has obtained a positive net profit from the first moment,” Ávila assured at a press conference. press.

After multiplying by 2.2 the sales of 2020 (117 million), this construction company of the squad of unlisted companies that make up the Anci association plans to conclude 2022 above its objectives. “We hope to reach 300 million in sales this year, against a budget of 286 million,” said Ávila. The context does not make it easy: the construction sector is having difficulties attracting talent, and the costs of construction materials and energy have generated enormous uncertainty in the bidding and execution of works. Ávila has demanded that the rebalancing systems for construction contracts, through price review mechanisms, jump to service and supply contracts.

“We discard one out of every four projects that we have under study because the numbers don’t come out, when previously we could discard one out of every 20 opportunities”, explained the executive. Lantania increased the entry of new contracts by 45% last year, to 277 million euros (48% from private clients and 52% signed with the public sector), and the target figure for this year is 400 million . The portfolio in execution, of 540 million, received a 54% boost.

The company begins to have the makings to play in the first division of infrastructures, betting on sustainable transport projects, renewable energies and water.

In the field of energy, Lantania hopes to begin work on its wind farms in Galicia in 2023 (250 MW) and is committed to solar developments: “We still have to decide whether to directly finance solar projects, bring in partners or we build for third parties”, explained the president of the company. At the moment, Lantania promotes small solar developments from scratch, adding 100 MW in pipeline and another 100 MW in the pipeline.

Another path of development is that of water infrastructure, a segment through which 48% of new contracts arrived in 2021 and 56% of income, and in which it moves towards the desalination business in search of opportunities in North Africa and the Middle East.

Lantania’s strategic plan also points to the concession model, where the company already has different references.

In the chapter on inorganic growth, Lantania has just bought two specialists in railway works: the Polish Polska Balzola and the Andalusian DSV. The strategic plan foresees 20 million for new acquisitions. In addition, the new subsidiary has begun to shoot indianspecializing in industrial work (mining, metallurgy, energy, etc.).

The passage of the pandemic slowed down the internationalization of a company that has put spades in Poland, Bulgaria or Slovakia. Business has also been accumulated with private clients in Colombia and looking for business in Peru or Chile. The roadmap until 2026 sets again North America on the Lanthanian horizon.