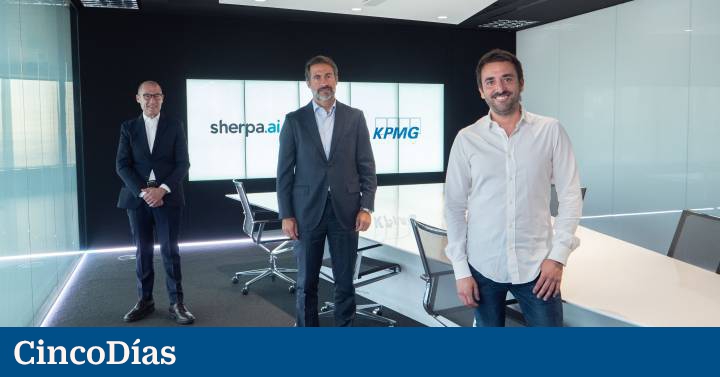 KPMG has signed a strategic agreement with Sherpa.ai to distribute among its clients the new artificial intelligence (AI) platform of the Basque company, whose main innovation is that it allows algorithms to be trained to be efficient and solve business problems without the need to share private data.

The platform, “the first commercial federated learning worldwide”, according to both companies, allows training artificial intelligence models both using external databases and company-owned data, including those internal that are public, but also those that Until now they could not be used for privacy reasons.

“This will help algorithms improve the accuracy of their predictions, resulting in increased sales or cost savings for companies. And if we take it to the health sector, here the benefit translates into saving lives “, said the founder and CEO of Sherpa.ai, Xabi Uribe-Etxebarria, who highlighted that the agreement opens a huge opportunity for his company to exponentially scale its sales.

The alliance is also an opportunity for KPMG. According to Luis Buzzi, partner in charge of KPMG Innovate in Spain, the agreement “marks a before and after for us, as we will be able to offer clients much more efficient algorithm developments and we will be able to really put artificial intelligence at the forefront, as a key variable in business development ”.

Although the agreement has been sealed between KPMG Spain and Sherpa.ai, it has a global effect. Thus, the objective of the consultancy is to offer the platform of the Spanish firm in the 147 countries where it is present, although for a few months it will focus its efforts on the Spanish market, according to CincoDías.

Both partners will begin the commercialization of the platform focusing on five sectors (banking, insurance, telecommunications, retail and health) and will target the top 5 companies in each of these industries, and with which KPMG already works, “to develop true AI models for a significant part of the Ibex 35.

According to Buzzi, they have already identified several use cases for each of those companies; in total, more than 100 that will be on the market in a few months. “We are going to get the AI ​​out of the mediocrity in which it had been installed due to the inability to use relevant and adequate data, due to a privacy issue. And when companies understand that now, with the Sherpa.ai platform, we are able to put a telco, a bank and an insurance company to share data without violating the regulations to train algorithms effectively, they will see that it is a critical element to improve their business ”, insists the KPMG partner.

Uribe-Etxebarria highlights that in proofs of concept that they have carried out, they were able to increase the sales of an insurer by more than 50 million euros per year with an algorithm. “This shows that the developments we make have a direct impact on the income statement, and this happens in just two or three months,” he says.

The question is how the Sherpa.ai platform works with which the two partners want to accelerate the world of artificial intelligence without violating any precept of confidentiality or privacy and respecting data ethics. According to the founder of the company, the platform works through a central aggregator, which puts a piece of software code in each of the nodes in which it works, in order to learn locally and send its results without breaking the rules of Privacy.

In the alliance, KPMG brings knowledge of the clients’ business, “to know where their business processes are most vulnerable and where artificial intelligence can help them the most”, and Sherpa.ai, its technology. But to face this new stage of growth at the hands of the consulting giant, the Basque company is making adjustments to its internal procedures and structure, hiring very senior professionals so that we can be scalable”Says Uribe-Etxebarria.

“This was a key issue for us,” acknowledges the KPMG partner, “because if we go hand in hand with Sherpa to customers, it is important that it meets expectations and, indeed, we see that it is being prepared. Our agreement with Sherpa.ai is not an overnight flower and we have been negotiating the alliance for months, and one of our requirements was that it had to start scaling for when we give speed and power to the project they are ready ”. The Basque company closed a financing round closed a financing round of 8.5 million dollars (7.2 million euros) to accelerate its growth last March.

Do you notice sensitivity in the market towards artificial intelligence? Do you think there will be demand for the platform? Buzzi is clear: “There has been a boom in artificial intelligence and everyone has signed up for it; companies have done many pilots, but the problem is that the algorithms that have been presented to them have not given a satisfactory result most of the time, and that has caused a lot of disappointment. But that is going to change with the Sherpa platform ”.