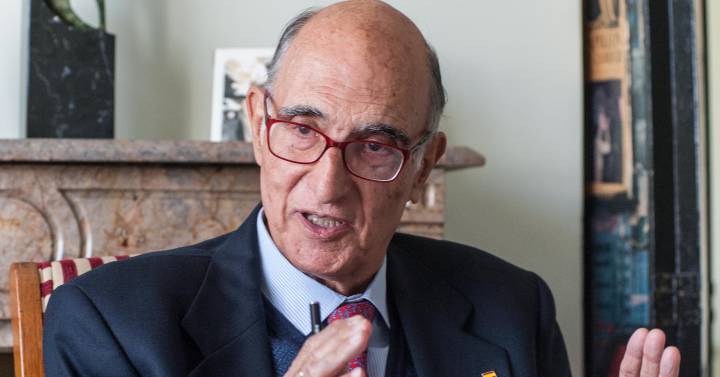 Julian Garcia Vargas has a wealth of experience in the public sector as president of the ICO (1982-85), Minister of Health (1986-91), Defense (1991-95), and special envoy of the EU to Bosnia (1995), among other senior charges. Now as president of the Feindef Foundation, he is committed to organizing the next International Defense and Security Fair 2021(Feindef ’21), the main industrial fair in the country, to be held next week, between November 3 and 5, in Ifema. García Vargas talks with Five days on the promotion plans of a sector that, together with aeronautics also present at the fair, contributes 14.1 billion to GDP (the 1,7%) and is directly and indirectly responsible for 211,921 jobs in Spain.

Question. What are your expectations for the biannual Feindef fair?

Answer. Very positive. We have already signed 242 stands, 100 more than in the previous edition, in 2019. 26 national and international authorities confirmed. We estimate the presence of 20,000 participants (it will double that of 2019), with strict sanitary control in the face of Covid.

Q. What is the profile of the participant in the fair?

R. He is a professional, who works for a company and comes to know the offers of competitors with a view to associating, basically, to see sales opportunities of his own products and possibilities of cooperation in some of the large projects that are going to be presented. They are professionals from the Security Forces and Corps and from companies in the sector. The plaintiffs are the agencies and the Armies. The bidders, the companies.

Q. It is the second edition of the fair, how can it be consolidated?

R. With the maximum number of exhibitors and technologists who can attend. It is a technology fair actually. R&D engineers and technicians.

R. Artificial intelligence, automation, cybersecurity, robotization, the use of drones and computing are going to be central elements. It is an explanation of the cutting-edge technological offer. The INTA (the great technological institute of the Armed Forces), the Incibe and the Emergency Military Unit (UME) will be present.

P. One of the objectives is to sign agreements and contracts …

R. The key is that national and international companies get in touch and see what synergies they have and, through this analysis, sign pre-contracts and agreements. The key is to be in European consortia.

Q. Can agreements be reached at the fair?

R. There are already companies working on it and that will culminate in the fair. There may be an announcement.

Q. There has been a lot of talk about the European combat aircraft project (FCAS).

R. There will be an explanation from Airbus and the major signatories of the initial agreement. How the project is going will be detailed at the fair. It will be given prominence. The fair will also feature the participation of leading companies such as Navantia, Indra, Tecnobit, Boeing, ITP, Oracle, Thales or Telefónica.

“Airbus will explain at the fair how the European fighter plane plan is going; Navantia has submarines in project with India”

Q. How do you see the Spanish defense sector?

R. Very technologically transformed, with greater capacity than when I left Defense. But at the same time, less and less national; only Navantia and Indra are purely Spanish. The rest of the tractor companies, such as Iecisa or Cesa have passed into international hands, not to mention Santa Barbara.

Q. Would a more national defense industry be desirable?

R. You cannot do without a certain strategic autonomy in the technological field. On the other hand, the inevitable trend is towards internationalization, due to the volume of resources required. Some internationalization is inevitable but we should preserve those two great elements that still exist, such as Navantia and Indra. And maintain a significant presence at Airbus.

“The Feindef fair will serve to promote Spanish R&D”

P. It is a land of Germans and French, with more capacity …

R. You have to be in close contact with them, with Italy as well. Now that the UK is gone, this is an opportunity to strengthen our presence. We must be in all the European defense consortia that are being formed. We cannot miss the opportunity to progress in technological capacity and contribute to European autonomy. It is a fundamental objective.

P. Defense is one of the industries that contributes the most to R&D.

R. Defense R&D (Tedae figures) reaches 1,200 million. After pharma and automotive, it is the third in contribution to R&D in Spain. In addition, the technology that is created is dual. Companies transfer it to non-defense products. An example, Cesa started with helicopter landing gear and fighter jets, and has ended up doing the same for civil aviation. Defense is a driving sector for R&D, quality employment and exports. It exports 80% of what it produces. The fair will serve to promote Spanish R&D.

Q. Would the defense area need more funding in the 2022 State Budgets?

R. You need stability in your running programs. And multi-year programs so as not to depend on the evolution of the Budgets each year. In that, Minister Margarita Robles is doing well. In times of budget shortage, it launched the new frigates and the combat vehicle, and has maintained it. It is also necessary to have additional items to enter into consortia that can be formed in 2022. For example, in terms of communications and control systems. We have to strengthen the European pillar, and replace the US in chapters that guarantee the functioning of NATO.

R. It is the European pillar of NATO without so much prominence from the United States.

On the other hand, we are now in talks with India to make conventional submarines. A contract that would guarantee the survival of Navantia for a long season. We hope that this project can be given a boost at the Feindef fair.

Q. What do you think of the recent sale of ITP Aero to Bain?

R. It is a small disappointment for everyone. The Basque and Spanish governments were waiting for Sener to enter. The Bain fund’s offer includes medium-sized Spanish companies, but the presence of Sener would give more weight; knows ITP, created it and has managed it for many years. It would be desirable to increase Spanish participation as far as it can go. If possible, incorporating Sener. ITP is an indispensable company for Air bus. It is the only European turbine factory with proven warranties.