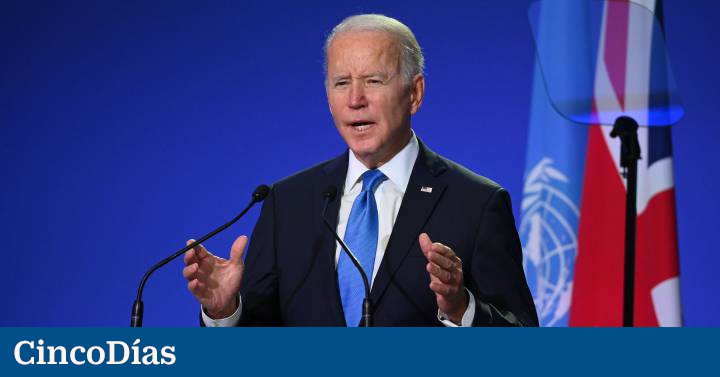 The US and China are two of the governments that can do the most for the survival of humanity, however, the most redeemable thing about Joe Biden’s passage through Glasgow, in his country’s stellar return to a climate summit, was an alliance Non-binding to reduce methane emissions. Xi Jinping only sent a written statement devoid of relevant announcements.

The comings and goings of these two superpowers delay the fulfillment of climate objectives (prevent the average temperature of the planet from rising above 1.5 ° C) because they are the two largest emitters of the gases that cause the melting of glaciers and the polar helmets. China is the first, with 11,705 million tons of CO2 equivalent in 2018, 24% of the total, and the United States, the second, with 5,794 MtCO2eq, 12%, according to Climate Watch.

“Climate change is a global problem and, without them, attacking it becomes more difficult and more expensive for the rest of the countries,” says Lara Lázaro, a researcher at the Elcano Royal Institute. In the specific case of the United States, it stands out that on its return to the battlefield it has set goals even more ambitious than those launched by Barack Obama.

Biden has pledged to cut his country’s emissions by 50-52% by 2030 compared to 2005, to generate all its electricity with clean energy by 2035, and to be carbon neutral by 2050. But the disagreement from two members of his own party in the American Congress prevented him from appearing in Glasgow with his approved infrastructure plan.

Relief did not come until three days later, with the president already back in Washington. Of the success of Build Back Better compliance with most of its environmental policy depends, since it plans to allocate a significant part of its budget of 1.03 billion euros to promoting the electric car, sustainable public transport, renewable energy and the restoration of forests and wetlands.

A gigaton at stake

The aggregate impact of all the measures contemplated in the program can save the atmosphere the emission of almost one gigaton of greenhouse gases between now and 2030, according to Rodhium Group, a New York-based research firm. However, it warns that only a “joint action” of Congress, federal agencies and states will allow this agenda to be carried out.

They are also very long-term objectives and nothing guarantees, as Trump has already shown, that the decision will be irreversible. The Republican victory in the recent Virginia gubernatorial election, seen as a plebiscite from Biden’s first year in office, does not invite optimism.

Democrat’s Green Agenda Needs Congressional Support
and of the states

“As a voluntary pact, the US and any country can participate and disconnect from the process when it deems it appropriate. Given increasing polarization and limited opportunities for bipartisan cooperation on decarbonization, US climate policy is likely to continue to be whipped from government to government, “says Mikaela McQuade, geopolitics expert at consultancy Eurasia Group.

Nonetheless, he agrees that “growing momentum from cities, states, and private actors and investors can lead to lasting directional engagement in the absence of federal efforts.”

China, for its part, remains on the path to climate neutrality, but does not expect to achieve it before 2060, an eternity in environmental terms. The most important step that it has taken on that path is to cancel the construction of coal plants abroad, although it has not touched the domestic plants.

On the contrary, the wave of blackouts suffered by 21 provinces this fall, as a result of an unprecedented power shortage, has led Beijing to increase coal and diesel production. The episode has renewed the old conflict between the economy and the environment, since the crisis is due to the greater demand for gas driven by industrial reactivation and the environmental cuts imposed on mining companies by the same regions.

For Bernice Lee, research director at Chatham House, an independent London-based policy institute, the dilemma is tricky: “Every country will have to deliver both energy security and climate action. It is not about whether they can do it or not. They must, ”he says.

“The energy crisis highlights the risks of excessive dependence on coal. A system based on efficiency and renewable energy will be safer and less volatile, you just have to manage the transition. All signs suggest that Beijing intends to stay on course to reach peak emissions by 2030, “he says.

McQuade insists that although the US has not contributed as much to the negotiating table of the summit as the Democrats would have liked, the announcement of an alliance with the EU, Brazil, the United Kingdom and so on up to 103 countries, to reduce this decade 30% methane emissions, show that “he has enough influence to do something.”

When Trump withdrew the United States from the agreement in June 2017, Democratic Sen. Chris Murphy of Connecticut, tweeted: “Dear planet, we are sorry. Please hold on for three and a half years and we will fix it. ” Biden rejoined his country in the pact in February this year, but it remains to be seen if he will be able to fulfill that promise.

The world needs you to be lucky because, according to the latest revision of the United Nations Environment Program, the sum of the national commitments made to date it won’t be enough to meet the Paris limit. If the current rate is maintained, the temperature will rise by at least 2.7 ° C by the end of this century. The planet will hardly last that long.

Taxpayers The participation of the United States and China in the Paris Agreement is also important for financial reasons, since both contribute to the United Nations Green Climate Fund, which pays for adaptation and mitigation actions in developing countries.

Money. Trump withheld 2,000 of the 3,000 million dollars promised by Obama to the fund, but Biden offered last September to raise that contribution to 11,400 million, although it will depend on the authorization of Congress.

Deficit. In 2019, industrialized countries contributed $ 79.6 billion to poor countries, about $ 20 billion less than the goal of $ 100 billion annually, according to the latest OECD report.