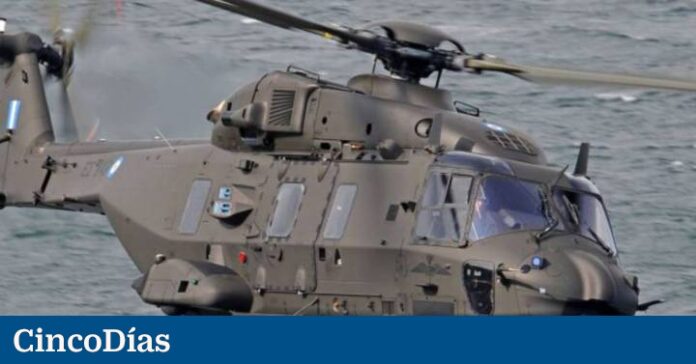 Indra has been awarded a contract with the Ministry of Defense for the contract to equip 23 NH90 helicopters with advanced electronic defense systems, which reinforce the safety of the aircraft and its crew in the area of ​​operations. The amount of the contract amounts to 111 million euros, will have a duration of 7 years and provides for scope extensions up to a total of 135 million euros approved by the Council of Ministers, according to the Spanish technology company.

The company will equip the GSPA and MSPT versions of this helicopter to be used by the Army, Air Force and Navy, with a suite of complete self-protection. The most innovative elements will include the suite enhanced (EW Manager), a fully digitized next-generation radar alerter (RWR ALR-400FD) capable of instantly covering the entire bandwidth and a DIRCM InShield infrared countermeasures system, which will protect aircraft against missiles ground-air thermal guidance or manpads.

Indra will also integrate and supply all the rest of electronic defense elements, including missile alert sensors, laser alert and the delivery system of chaff and flares (CMDS) that serve as decoys to circumvent attacks, as well as the associated test and support equipment on the ground.

The company notes that the helicopters’ ability to fly at low speed and height and to land virtually anywhere gives them their main operational advantage, but also makes them especially vulnerable to attack. “Our technology will protect the platform and its crew against a new generation of threats that are more advanced and difficult to detect, improving their survival”, Indra said in a statement.

Radar-guided missiles, for example, use frequency hopping techniques to conceal themselves while some missile launchers manpadsA cheap and easily available weapon on the black market, they use projectiles with very sophisticated guidance systems.

“To face this challenge, Indra will develop an advanced full band alerter, with the ability to instantly monitor the entire electromagnetic spectrum, instead of covering different bands through partial band scanning strategies as was customary until now,” he adds. Indra.

To carry out this task, the company will provide the system with a capacity for direct and instantaneous digitization of the electromagnetic spectrum that will allow it to analyze all signals at an enormous speed and coordinate the rest of the detection and countermeasure elements. “In this way, Indra’s alert system will detect threats with an unprecedented level of reliability and immunity against disturbances in order to neutralize them “.

For its part, the InShield system of infrared countermeasures will blind the thermal guidance system of missiles that are launched from the ground with a beam of laser energy “directed automatically, effectively and safely”. According to the company, this system of countermeasures, “of enormous sophistication, and capable of counteracting several simultaneous missile launches, is key to protecting the aircraft when it is about to land or take off or when it is flying low.”

The InShield system was tested in 2017 in NATO EMBOW exercises aboard a Chinook (CH-47). “Currently it is the only DIRCM system on the market that has demonstrated its capabilities in the Alliance tests”, highlights Indra. The system is being integrated for its operation in the Air Force’s fleet of A400M aircraft.