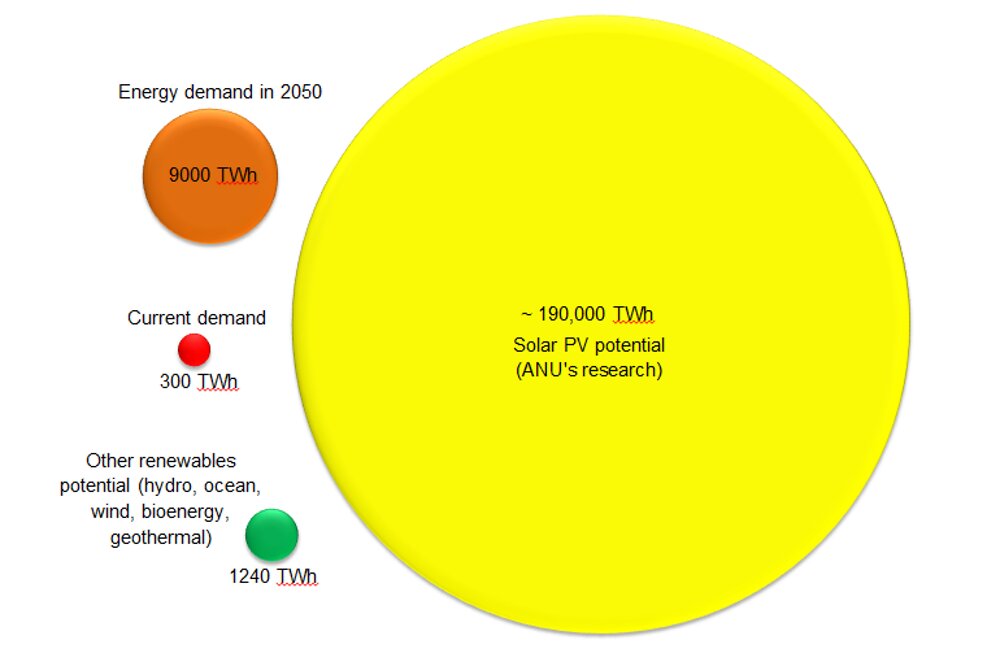 In 2050, 335 million people in Indonesia will enjoy a high standard of living, in an industrialized country that uses no fossil fuels. Instead, nearly all energy will come from solar panels. Transport, heating and industry will be fully electrified.

Electricity demand will have grown 30-fold to 9,000 Terawatt-hours (TWh) per year. These demands are equal to 7 Terawatts (TW) of electricity, harvested by 10 billion solar panels, occupying a space of 35,000 square kilometers.

This is the vision outlined in a recently published study by the 100% Renewable Energy team at the Australian National University (ANU), which showed Indonesia has vast solar energy potential—far larger than all other energy sources combined and far larger than needed.

Solar has contributed to around half of global generation capacity additions because it is cheap.

But where might Indonesia put the 10 billion solar panels it needs?

Based on our study, the panels could be located on rooftops and defunct coal mine sites, on agricultural sites, and floating on Indonesia’s calm equatorial inland sea.

Where to install the solar panels?

Here is where to install 10 billion panels:

(1) Rooftop solar: This occupies no extra space. Large amounts of solar can be accommodated on residential, commercial and industrial rooftops, building facades, and other urban areas—amounting to 7–19% of requirements.

(2) Agrophotovoltaics (APV) involves the co-location of solar panels among pasture or crops. This dual use of land could be an additional income stream for farmers.

Many countries, for instance, have developed large-scale APV systems connected to a power grid.

Indonesia has 210,000 square kilometers of low-growing crops such as rice, maize, or coffee. Assuming an average APV coverage of 10%–30% is applied to all low-growing crops except rice, 30–90% of the required panels could be placed on such sites.

We found that 2,300 square kilometers of licensed mining area in Indonesia is disturbed land. It could host around 0.5 TW of solar PV capacity (about 7% of requirements).

How do we balance solar powered electricity system?

To balance a 100% solar powered energy system during the nighttime and rainy periods, Indonesia could rely on the vast potential of off-river pumped hydro energy storage (PHES).

Off-river PHES requires pairs of modestly sized reservoirs at different altitudes. The reservoirs are joined by a tunnel with a pump and turbine. The excessive electricity produced from solar panels during sunny days can be stored by pumping water uphill.

Then, when electricity generation is low during cloudy weather or at night, electricity can be dispatched on demand by releasing the stored water downhill through the turbine.

It’s still a long way to go, but solar development is within reach

The Indonesian Ministry of Energy and Mineral Resources reports that a total of 154 Megawatts (MW) of solar panels has been installed. This is far below Australia (25,000 MW) and Vietnam (16,500 MW), and is even below Singapore (377 MW).

However, this is about to change. The first floating 145 MW solar PV in Indonesia on Cirata Reservoir, West Jawa will start operating at the end of 2022. The same plan will also be developed in eight other reservoirs in Java and Sumatra.

The government will also develop power plants in ex-mining areas with a total capacity of 2,300 MW: in Bangka Belitung (1,250 MW) as well as in East Kalimantan province’s districts of West Kutai and Kutai Kartanegara (1,000 MW and 53 MW respectively).

Under a newly issued regulation by the Minister of Energy and Mineral Resources, the electricity state-owned enterprise (PLN) will pay for 100% of the electricity produced by customers’ solar panels (previously 65%). This will encourage households to install more solar on rooftops.

Solar PV is the future of energy in Indonesia. However, to accelerate the deployment of solar PV, support is needed to utilize the potential areas mentioned above.

Above all, it is the right time for the government to publicly recognize the effective and unlimited potential for solar to generate reliable low-cost electricity.

Provided by
The Conversation


This article is republished from The Conversation under a Creative Commons license. Read the original article.

Citation:
Indonesia could harvest solar energy from 10 billion panels, but where do we put them? (2021, September 28)
retrieved 28 September 2021
from https://techxplore.com/news/2021-09-indonesia-harvest-solar-energy-billion.html