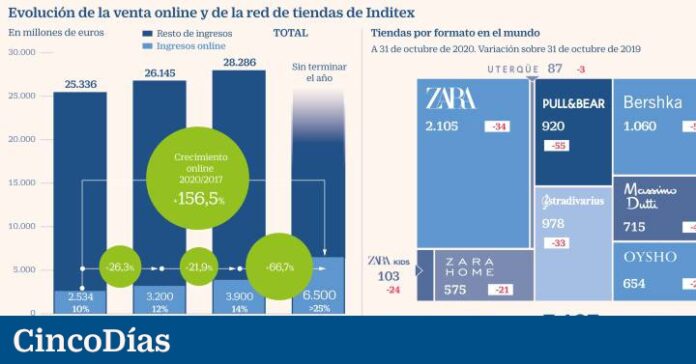 If the pandemic has achieved something, it is to promote the online sales channel as a relevant source of income for retail companies. Also for Inditex, embarked on the objective of selling with all its brands In all countries of the world when its fiscal year ends on January 31st.

An exercise for which the company chaired by Pablo Isla plans to achieve sales through this means of 6.5 billion euros, according to the documentation sent yesterday to the CNMV. Inditex does not usually break down the online business figures during the year and is not given to venturing with income estimates. But the push that the channel is having during the year motivates it: in the third quarter, sales through this channel grew by 76%, and in the accumulated of the year by 75%. According to data published yesterday, visits to its different sales platforms have grown by 44%, to 3,427 million.

That goal of 6.5 billion would mean a growth of more than 66% compared to the 3,900 million that Inditex reported at the close of the 2019 financial year. A figure that represented 14% of the group’s total sales, two points more than in the previous year. A percentage that will make a significant jump at the close of the current course.

Because Inditex will exceed 25% of the annual revenue generated by the online channel this year 2020, two years before what it set as a goal not long ago, last June, when it presented the results for the first quarter.

For those 6,500 million to represent 25%, Inditex should achieve annual revenues of 26,000 million. In the first nine months it has billed just over 14,085, so it should record a historic fourth quarter to reach that figure. Something that, with the current context, seems completely unlikely.

The last quarter is the most important in sales for the group since it includes key dates such as Black Friday, Christmas and Kings. In recent years, the revenues generated between November and January have grown by around 20% compared to the previous quarter. In the context of the pandemic, any calculation is likely to be breached, but following that average, Inditex would invoice around 7,300 million, exceeding 21,300. On this figure, online would represent 30% of the total, a more feasible environment.

On the other side of the coin are physical stores. As of October 31 of this year this fell to 7,197, 289 less than a year and 140 less than those of the textile group at the end of the first semester. This is the largest contraction that Inditex’s point of sale network has suffered in its history, after the group announced in June that it was accelerating its plan to close establishments, which includes up to 1,200 closures between this year and next

Of the brands that make up the Inditex ecosystem, the one that most saw its network reduce is Pull & Bear, with 55, followed by Bershka, with 51, and Massimo Dutti, with 45. As of October 31, Zara had 2,105 stores, 34 less than on the same date of the previous year.