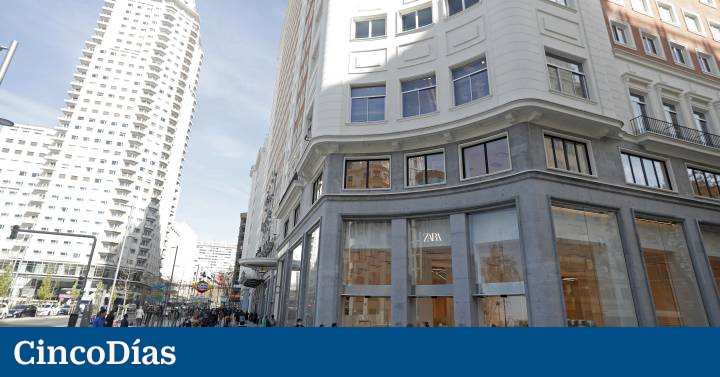 Inditex opens the doors this Friday to the most important project it has undertaken in years in its Spanish physical network, in which store takeovers have been gaining prominence compared to openings. These are the two new establishments of Zara and Stradivarius in the Plaza de España in Madrid, on the ground floor of the Plaza Riu Hotel, where it will occupy a total area of ​​more than 9,000 square meters, including sales space and warehouse.

A project, especially that of the Zara store, in which the Galician textile giant deploys its entire arsenal of technological resources and exhibits the capabilities of its “integrated model”, that is, the coexistence between traditional physical sales and online , which already accounts for 25% of the group’s income.

The space has a total of 7,700 square meters built spread over four floors and a basement. Of them, only half correspond to sales area. Inditex wants its large stores to also be huge warehouses for the digital channel, something that reaches its maximum expression in Plaza de España. “Gran Vía 84 is the maximum exponent of Zara’s new commercial concept, based on spacious flagship stores, renovated and equipped with the most efficient technological tools,” explains the company.

The app is the basis of the establishment’s digital capabilities. Through it you access the new service Pay&Go, which allows the customer to buy the garments by scanning them with their mobile, only having to disarm them at specific points in the store. In this new Zara there is also, for the first time, an automatic mailbox for returns of garments purchased through the Internet. With the app and a QR code, the customer deposits the product to be returned in a tray without the intervention of any store employee. Something similar to the online order collection area, present in other Zara stores, but in this case it has a silo with a capacity for 1,500 orders. What is purchased reaches the customer in a period of between 6 and 12 seconds, after presenting, again, a QR code.

Also with the app, with the store mode, you can check where the desired garment is in the establishment, reserve a place in a fitting room or pick up a product ordered through it in a space of 120 minutes. “The implementation of these new functionalities is one more step in the Inditex group’s store and online integration strategy,” says the company, through its own technological ecosystem, baptized the Inditex Open Platform.

In terms of commercial offer, this Zara brings together the women’s, men’s and children’s collections. The store space allows the firm to introduce exhibition areas. It is the first with showrooms for footwear and accessories, lingerie and its new sports collection, Athleticz, in which it exhibits a unit of each reference, with adjacent mini-warehouses with all sizes.

The store also reserves a space for Zara Beauty products, the brand’s cosmetics line, which has new furniture and also has screens to virtually test the products. In total, the store will have 200 workers.

Opening. In the other corner of the Spain Building, Inditex is also launching the new Stradivarius store concept, with an establishment with a surface area of ​​1,240 square meters distributed over two floors, which also has technological features such as the store mode, self-checkout counters and a specific area for collecting online orders. It also represents a change in the decoration of the premises of this brand. The store also kicks off with an immersive exhibition by Cuban artist Rachel Valdés. Customers of the two new Inditex stores in Madrid’s Plaza de España will be able to access them from a newly created car park and from the plaza, where sidewalks and pedestrian accesses have been widened.