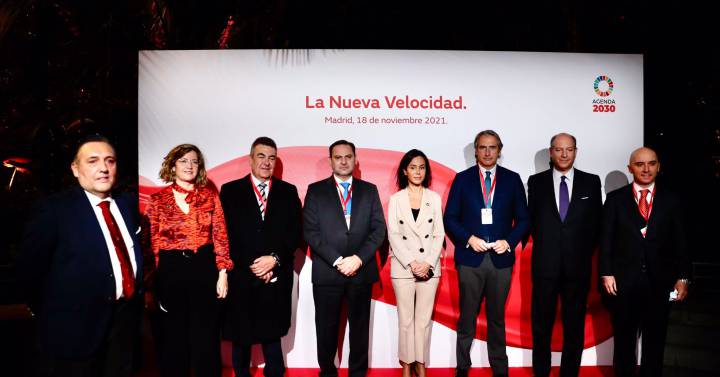 The first of 20 trains Frecciarossa 1000 what ILSA It will be put on the Spanish high-speed network, starting in the second half of 2022, it has been presented this afternoon before some 200 people at the Madrid Atocha station. Along with the model, the commercial brand of what will be the third service in the running together with Renfe’s AVE and Avlo and the Ouigo operated by SNCF has also been discovered: Iryo. The slogan that accompanies this identity is that of The New Speed.

ILSA and its Iryo service will occupy the 30% of frequencies of trips in the three corridors in which Adif has granted framework capacity for ten years, Madrid-Barcelona, ​​Madrid-Levante and Madrid-Sur. Your expectations go through attract 50 million high-speed passengers in its first ten years of activity, after an investment estimated at 1,000 million (800 million in the twenty trains) and the generation of some 2,600 direct and indirect jobs. The forecast in the first year of full operations will be to reach eight million users among the three brokers.

The operator owned by the shareholders of Our Air y por Trenitalia will link Madrid with Barcelona, ​​Seville, Malaga, Cordoba, Valencia, Alicante and Zaragoza. The Secretary of State for Transport, Isabel Pardo de Vera, the president of Adif, Marisa Dominguez, or the senior managers of ILSA Carlos Bertomeu, Simone Gorini and Víctor Bañares.

The investment will be 1,000 million euros, 80% in the fleet of 20 Frecciarossa trains

The fleet, newly produced in workshops in Italy and Spain, comes out of the collaboration between Hitachi Rail y Bombardier Transportation, the latter integrated into Alstom. Of this rolling stock, in the approval process since September, it was highlighted that it is the only one with the Environmental Product Declaration (EDP), as well as its creation with 95% recyclable materials. ILSA assures that it is the most sustainable, quick and silent squad, in addition to saving “80% in CO2 per passenger and journey”.

The president of ILSA, Carlos Bertomeu, highlighted during the ceremony that the development of Iryo will be a long-distance race “based on the highest operational quality, compliance with current regulations, state-of-the-art technology, and a differential service culture” . CEO Simone Gorini praises the development of the railway network in Spain and anticipates that Iryo will set “a new standard for the consumer in personalization, digitization and sustainability.”

Secretary of State Pardo de Vera has alluded to her old team at Adif as a leader of railway liberalization in Spain and has demanded that the rest of the European countries “comply with the mandate of the European Commission as this country has done.”

The red color that is already distinctive of the Frecciarossa that roll in Italy, for the public Treintalia, will also be so in Spain. As for the Iryox brand, it leaves the studio of the Barcelona Columna Branding, which has already worked on the modernization of the Vueling brand or on the development of corporate images for Grupo Planeta, Pascual, Dodot, Borges, Fluidra, Campofrío or P&G.

Columna has taken care of the entire brand strategy in a comprehensive project that already competes with the campaigns for the new low-cost rail services Avlo, created by Summa for Renfe, and Ouigo, whose launch and marketing strategy in Spain was entrusted to Havas.