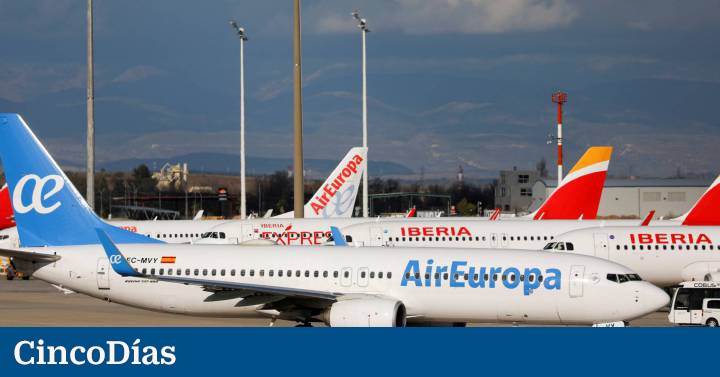 The IAG group is not throwing in the towel in its complex attempt to take over Air Europe. The holding company that controls Iberia has agreed with Globalia a loan of 100 million euros convertible into 20% of the capital of the aforementioned airline. The agreed figures value 100% at 500 million euros, regardless of debt.

This new oxygen balloon for the tourist group of Juan Jose Hidalgo It is structured in a seven-year unsecured loan. In return, the holding company he runs Louis Gallego will have the option to convert this economic injection into shares of the Globalia airline.

Iberia and its parent company will once again have a one-year period of exclusivity to negotiate with the Hidalgo family and the Government the acquisition of Air Europa. It has also been made with a right to match any third-party offer by the airline in the next three yearsalong with a right of exit with Globalia in the event that it decides to sell Air Europa at any time in the future.

Gallego has reiterated his conviction about “the strategic importance of this operation for the development and competitiveness of the hub de Madrid”. The negotiations between eternal rivals, Iberia and Air Europa, date back to 2019, resulting in an acquisition agreement that was communicated in October of that year. The pandemic had not yet broken out, and this conditioned everything.

From an initial offer of 1,000 million in cash, it was lowered to 500 million and to be paid in several years. The health crisis had put both companies into losses and exhausted the liquidity of Air Europa, which received a ransom of 475 million by the fund managed by SEPI. Finally, Iberia gave up its purchase attempt given the certainty that the European Commission would not accept the remedies proposed to favor competition. He had to pay 40 million for the breakdown of the acquisition project and another 35 million to avoid lawsuits and be able to continue negotiating. Those 75 million were deducted from Air Europa’s final appraisal if an acquisition formula was agreed upon again.

The CEO of IAG emphasizes that “the world has changed since we started negotiations. This agreement will give us time to exclusively evaluate alternative structures that may be of interest to both companies and that offer significant benefits for their customers, employees and shareholders”.

The new understanding with Globalia, IAG has indicated before the CNMV, is conditional on the tourist group receiving the approval of the syndicated banks that facilitated the loan contract partially guaranteed by the Official Credit Institute (ICO) and the State Society of Industrial Holdings (SEPI).

IAG has agreed to help Globalia in the face of negotiating pressure from the latter with at least one bidder, presumably Air France. Iberia cannot afford the entry of a direct rival in its Madrid-Barajas hub, in the face of which it has put all its meat on the grill. In fact, Gallego and his Until now, they had refused to advance more money to Globalia. in the face of the uncertainty of what would be the opinion of Brussels on this concentration of the airline sector in Spain.

Madrid-Barajas competes with large air connection nodes such as Paris, Amsterdam, London and Frankfurt. IAG supported its offensive against Air Europa on the grounds that Iberia could strengthen its routes to North America, the Middle East and Asia while not leaving the South Atlantic flank uncovered. The competitive situation of two large network airlines in Madrid, such as Iberia and Air Europa, is practically unique in Europe and makes both compete for the same piece of the cake, Latin American traffic.

In IAG and much of the Spanish tourism sector, represented in the Tourism Board of Spainit is believed that Madrid-Barajas loses connection opportunities, essentially, to Asia if Air Europa is taken over by foreign hands.