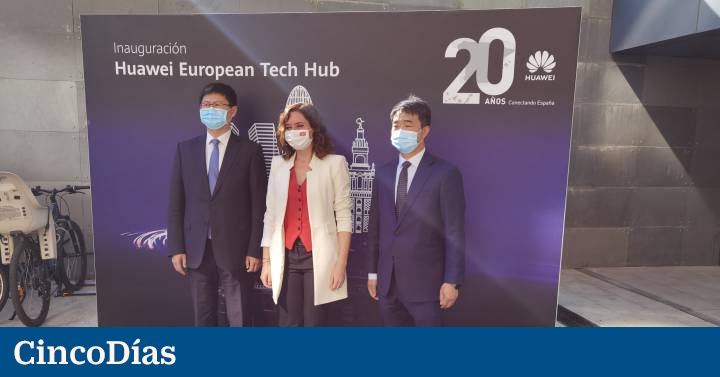 The Chinese giant Huawei has opened a new service center in Madrid from which it will provide technical support to telecommunications operators in 10 European countries. The new hub Technological currently has 160 employees, between direct and indirect personnel, the vast majority with a “high-level” technical profile, from transport and network engineers to software or wireless technology engineers.

The company, which thus centralizes services that until now it has offered from facilities in the different countries where it is present, assured that the plans are to increase the center’s workforce in the coming years, “although everything will depend on the investments that the operators are making and how keep growing our business, “they said.

The president of Huawei Europe, Li Peng, who was accompanied at the ceremony by the president of the Community of Madrid, Isabel Díaz Ayuso, assured that with the opening of this center the company continues to show “its firm commitment” to establish Spain as one of the main technological enclaves in Europe, “in addition to continuing to promote and support the talent and digital skills of Spanish professionals”.

The center provides solutions to improve the efficiency of networks through the automation and implementation of new functionalities for the evolution towards 5G of wireless and transport networks. As detailed, from the new hub they serve telecos in Germany, the United Kingdom, Ireland, France, Italy, Belgium, the Netherlands, Switzerland, Portugal and Spain. Some of its clients in these markets are Vodafone, Telefónica, Orange, Deutsche Telekom, Sunrise, Swisscom and Three.

Huawei officials said they anticipate that the hub generate a monthly turnover of one million euros.

Peng recalled that Huawei currently has more than 10,000 employees in the Old Continent and serves customers in almost all the countries of the continent. “Europe is one of our most important strategic markets worldwide. In 2020, our investment in R&D amounted to more than 20,000 million dollars (more than 17,000 million euros), which represents more than 15% of our income “, pointed out the manager, who highlighted that this figure places the company in third place in terms of investment in industrial R&D within the EU. “And this year we will continue to invest in R&D,” he said.

The president of Huawei Europe added that the European Commission “has paved the way for the digital decade, which will put the EU in a position to achieve its digital transformation goals by 2030. The EU aims to become the most attractive digital economy in the world and our vision is very much aligned with this strategy, ”he said.

The company has not disclosed the precise data on the investment it has made in the new center, located at Huawei’s headquarters in Madrid, but it has indicated that the investment for its start-up is within the 20 million that the firm is going to to be allocated to R&D in Spain this year (60 million in the last four years) and that the hub it will have “a sustained investment over time.”

The manager justified the choice of Madrid to establish the center, ensuring that “it has not only been chosen for its unique advantages, but also for the broad support provided by Spain. [la compañía]. During the last 20 years, the Spanish Government and the Community of Madrid have provided Huawei with an open and transparent business environment through fair industrial policies. This has allowed us to participate fully in the construction of ICT infrastructures in Spain ”.

As for the problems faced by the Chinese giant due to US sanctions, which led it to cut its revenues by more than 24% in America and 11.5% in EMEA (Europe, Middle East and Africa) in 2020, Peng defended the company’s “business continuity” and “worker stability.” “Huawei will continue to supply competitive products and solutions for our customers and will further contribute to the transformation of Europe,” he stressed.

Díaz Ayuso highlighted, for his part, that the new Huawei center “represents a boost for the region, which has the best telecommunications infrastructures in Europe”, allowing it to host a third of the country’s technology companies and “to 64% of the entire investment.” According to the president of the Community of Madrid, projects such as that of the Chinese company represent “a boost to the region as a digital benchmark” and are “a sign that our policies are working” to make Madrid “the leading technology center in the world. South of Europe”.