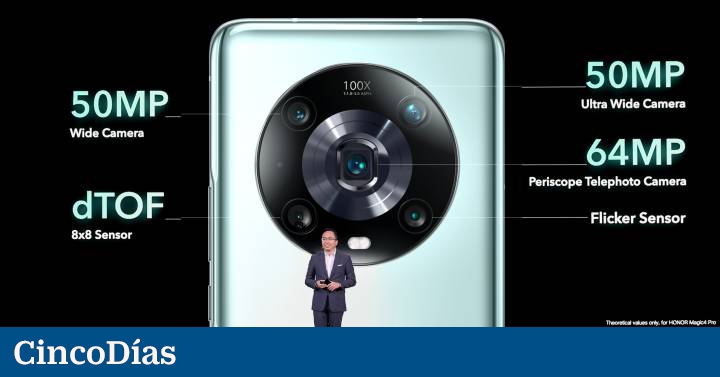 Honour, the The low-cost mobile brand that Huawei sold in November 2020 to guarantee its survival after the US veto the Chinese giant, today presented a new batch of high-end mobiles at the Mobile World Congress, the Honor Magic4 and Honor Magic4 Pro, which will arrive on the market in the first half of May.

The company seeks with them to position itself in the most premium segment of the market and for this reason it has equipped them with the latest Qualcomm processor, the Snapdragon 8 Gen 1 5G, the most powerful in Android mobiles. According to Honor, the equipment gains in speed and efficiency compared to the previous generation. Thus, CPU performance improves by 20%, GPU performance by 30% and artificial intelligence (AI) capabilities by 300%, they said.

The device incorporates a 6.81-inch Amoled LTPO screen with FullHD+ resolution, capable of varying its refresh rate between 1 and 120 Hz, depending on the content consumed, which guarantees greater energy efficiency and a more fluid entertainment experience. . Additionally, the screen can display up to 1.07 billion colors and is 100% DCI-P3 compliant, allowing for sharper, truer colors.

The smartphone, reminiscent of the Huawei Mate 40 with a ring on the back where the photographic sensors go, it has three cameras: a 50-megapixel main sensor with a 1/1.56-inch color sensor, a 50-megapixel wide-angle with 122º field of view and a 64-megapixel telephoto lens with 3.5x optical zoom. The equipment also includes computational photography technology and a camera to selfie 12 megapixel.

As for video recording, the new Honor flagship allows you to record video in logarithmic format at 4K, 10 bits and 60 FPS, which promises a more precise editing of the recordings. The company indicated that the terminal is capable of capturing true quality images while recording videos, without being limited by the quality of the video recording, as is usual in other smartphones.

Regarding the battery, the Honor Magic4 Pro comes with a 4,600 mAh battery and 100W fast wireless charging. The equipment is charged to 100% in just 30 minutes, according to the company. The new terminal has an ultrasonic fingerprint reader (from Qualmcomm) under the screen and is iP68 certified, so it can be submerged in depths of up to 1.5 meters for half an hour.

The new smartphone, that incorporates a solution to minimize eye fatigue and carries the latest version of Honor Magic UI 6.0 based on Android 12, it will be available in multiple colors, although it will arrive in Spain in cyan green and gold and, in principle, only in the version of 8 GB of memory and 256 GB of storage. It will cost 1,099 euros.