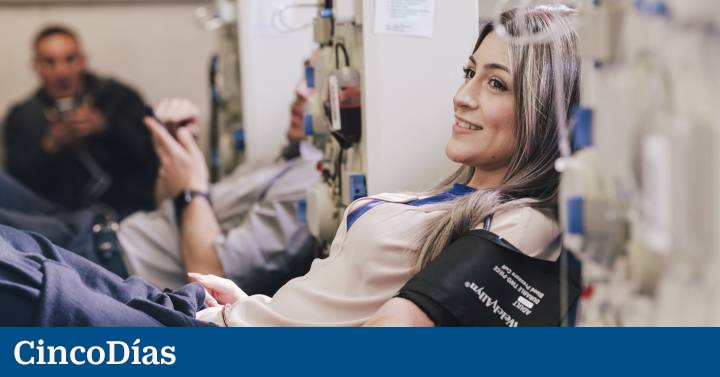 The Catalan plasma derivatives multinational Grifols assures that it has managed to improve the collection of plasma in the first quarter of the year, an issue that worries investors and the company due to the problems that have arisen in its collection due to health restrictions after the Covid pandemic -19. After the announcement, the laboratory’s shares soared 9.43% in the trading session on Friday, reaching a price of 18.62 euros per title.

After the strong stock market rebound, the pharmaceutical listed on the Ibex 35 has revalued 11.26% so far this year.

The company announced in a statement this Friday that in the first 17 weeks of the year, the volume of plasma collection grew by 16% compared to the previous year and 9% compared to the last quarter of 2021. The laboratory run by the Grifols family decided not publish quarterly results (it only presents the semi-annual ones) although it sent some updates on its business, among them regarding the obtaining of plasma. That document indicates that they are currently “reaching pre-Covid weekly levels.”

Plasma is the necessary raw material for this blood products industry and since the beginning of the pandemic, with fewer people selling their plasma in the US, it has affected Grifols’ production.

Grifols reported that the main drivers that have contributed to a greater collection of plasma have been the new openings and recent acquisitions of plasma centers; obtaining higher volumes in regular centers, and achieving greater efficiencies related to technological, digital and operational improvements, which are expected to continue driving plasma volumes throughout the year.

Regarding revenues, the laboratory points out that they increase a medium-high digit in the first quarter, without disclosing the figure, or a low digit at constant change. Its main business, blood products, grew by two digits, precisely due to the improvement in the supply of plasma, the increase in the price of some of its proteins and strong demand. Regarding EBITDA, Grifols revealed that it improves up to 20% of income. It must be remembered that in the last quarter of last year, the laboratory closed with a loss.

The company also recalled the recent purchase of the German company Biotest, of which it owns 96% of the voting rights and 70% of the share capital. Thanks to this purchase, it adds 29 plasma collection centers in Europe, bringing it to 400 worldwide (312 in the US).

The company also stressed that its commitment to rapid deleveraging “remains intact”, to reduce the debt ratio to 4 times the EBITDA in 2023 and 3.5 times in 2024. The purchase of Biotest and the inclusion of the capital of the agreement with the Singapore sovereign wealth fund (GIC) as debt has led the company to have a ratio of around 7.5 times.

The company also reported that its liquidity position exceeds 1,000 million. “There are no significant maturities or amortizations of debt until 2025. Currently, about 60% of Grifols’ debt is at a fixed interest rate, a figure that increases to 75% considering the debt in dollars. This optimized financial structure would mitigate the impact of potential interest rate hikes,” he stated.

In its statement, the pharmaceutical company also highlighted that it has strengthened its profitability due to operating leverage, with an improvement in operating costs of 400 basis points in the first quarter compared to the last quarter of 2021 despite inflationary and salary pressures, and the still high levels of compensation to donors.