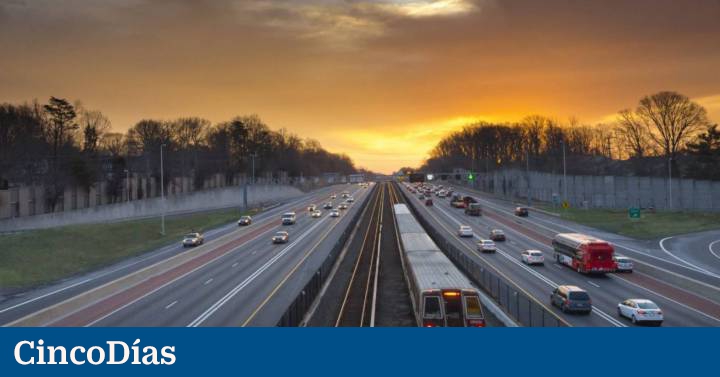 From losing 424 million in 2020 to a net profit of 1,197 million euros in 2021. This has been the rudder change of Ferrovial, which boosts its results with divestments and a million-dollar fair value adjustment. The latter is due to the seizure of 5.7% of its US highway I-66, operation of 162 million that placed the company as a controlling shareholder and which entails the recognition of a positive fair value adjustment before taxes for Ferrovial of approximately 1,117 million euros.

The gross operating result amounted to 596 million last year, which represents an increase of 39.5% in comparable terms from the 406 million a year ago. Revenues improved by 5.4%, to stand at 6,778 million.

From the point of view of activity, the group that presides over Rafael del Pino has been supported by the improvement of the areas of Highways and Construction. And from a financial point of view, divestment in the Services activity in Spain and in assets that the company describes as non-strategic has been essential.

Divestments have reached 1,621 million euros. The Environment area in Spain and Portugal has gone into the hands of PreZero for 1,032 million euros, in an operation that generates a capital gain of 335 million euros. An agreement was also reached for the sale of Timec Oil & Gas in the United States to a fund managed by Architect Equity. And at the beginning of 2022, the transfer of the Infrastructure Services business in Spain to Portobello Capital for 171 million euros.

The Budimex Nieruchomości real estate division, which was transferred to CP Developer for about 330 million euros after transaction costs. This latest operation has had a positive impact on Ferrovial’s consolidated accounts of 131 million euros. Finally, the transfer of shares in assets such as the Figueras prison (42 million euros), URBICSA (17 million), Nalanda Global (17 million) and the aggregates company SCC (140 million dollars) has been completed.

The liquidity of the group is 6,421 million and the net cash, excluding infrastructure projects, marks 2,182 million (including discontinued operations).

Another basis of development for the group is once again the collection of dividends in different projects: 550 million, essentially for toll roads, compared to 458 million in 2020. The Canadian highway 407 ETR distributed 600 million Canadian dollars, of which 164 million euros correspond to Ferrovial. The Texas highways, for their part, paid 220 million euros, other toll projects totaled 85 million more, and 43 million were generated by the Services division.

The board of directors has called a meeting for April 6 and 7. Among the proposals is the authorization for the acquisition of treasury stock and a flexible dividend in terms similar to those of previous years, which will be implemented through two paid-up capital increases.

The flexible dividend would be equivalent to a total payment of approximately 0.715 euros per share, distributed in two deliveries in 2022, and may reach a maximum of €520 million. The shareholders’ meeting will also be attended by a capital reduction to amortize existing treasury stock and own shares acquired through a buyback program for a maximum of 500 million euros or 34 million shares.

Ferrovial’s Texas highways improved their behavior despite the rebound of the coronavirus last summer and December. All of them have obtained double-digit growth. The traffics of NTE, NTE 35W and LBJ they rose 32.7%, 26.8% and 23%, respectively, over the volume of 2020. Both NTE and NTE 35W have ended the period reaching levels higher than 2019.

the canadian 407 ETR It has been improving since the end of June, with the relaxation of mobility limitations. Its traffic improved by 13% compared to the previous year. For its part, the I-77 in North Carolina also showed a notable increase in traffic, with an increase of 45.8%.

In the airport area, Heathrow transported 19.4 million passengers last year, a figure that is 12.3% lower than the previous year.

In Airports, Heathrow’s revenues rose by 3.3%, while EBITDA rose by 42.2%, adjusted for the Airport Cost Recovery rate and the increase in other regulated rates. The reopening of commercial premises, in addition to other issues, was reflected in the AGS airports, which increased their revenues by 22.5%.

Construction obtained an operating result of 132 million euros, compared to 101 million euros the previous year, and a margin of 2.2%. The division’s portfolio recorded a record figure of 12,216 million. Sales increased by 3.1% in comparable terms to 6,077 million euros. 83% of the turnover corresponded to international business, highlighting the weight of Poland and the United States.

Parallel to the rotation of assets, Ferrovial began an investment cycle months ago to which it allocated 1,112 million in 2021. The purchase of 24.86% of the Indian highway company IRB Infrastructure Developers stands out.

It also increased by 5.7% its participation in the US highway I-66, located in Virginia. After the operation, valued at 162 million euros, it raises the company’s position in the asset to 55.7%.

In recent days, the company has announced the acquisition of 60% of the Dalaman airport concessionaire from YDA Group for 140 million euros.