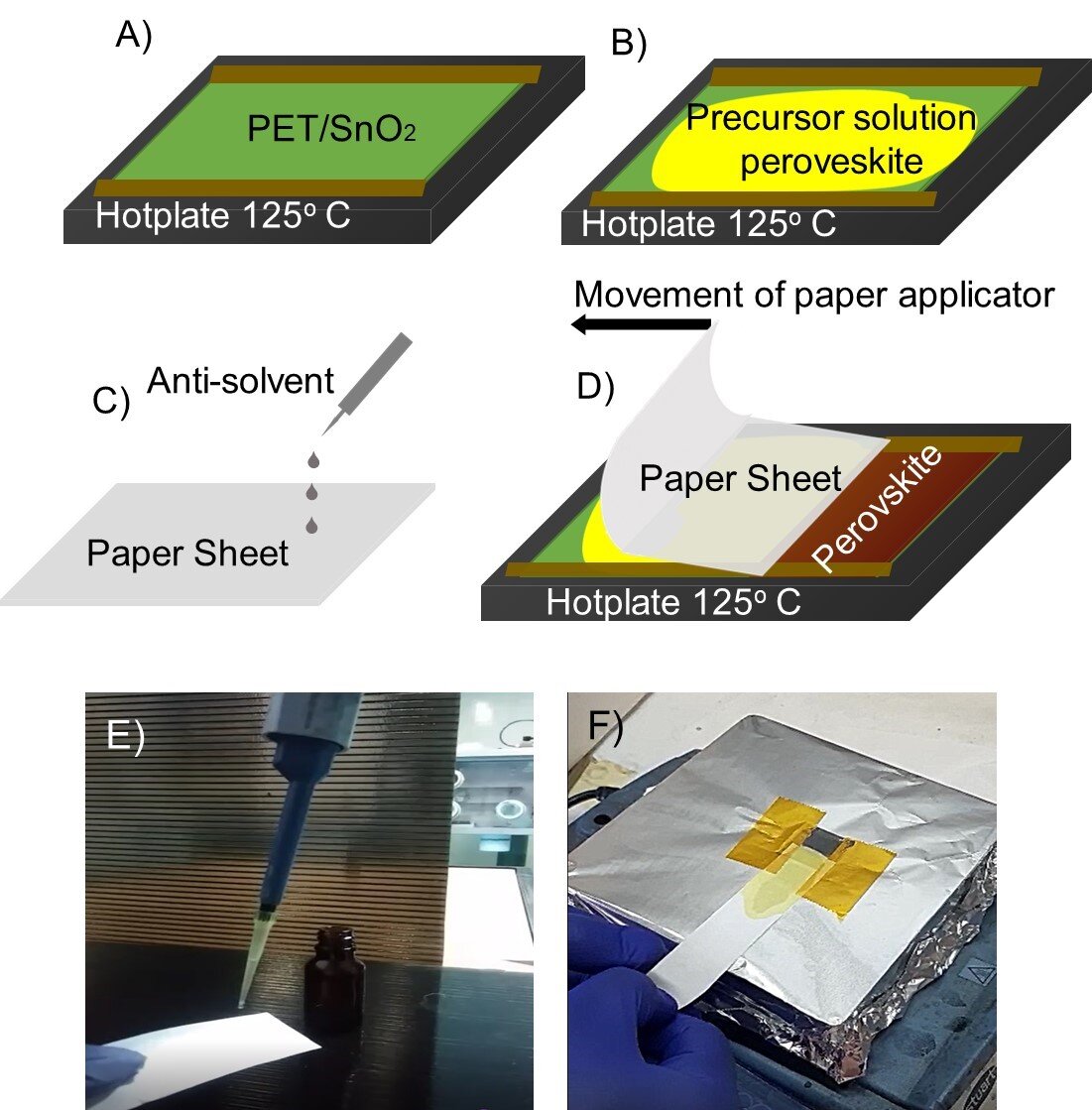 Perovskite semiconductor solar cells are a very exciting photovoltaic technology possessing similar efficiencies to silicon but cast or printed in thin films via liquid inks. A new method that uses a simple sheet of paper to deposit the perovskite films without any expensive equipment has been developed by a team from Tor Vergata University and University of Zanjan. The trick to achieve high performance with this remarkably cheap method is to soak the paper applicator in anti-solvent which almost doubles efficiencies compared to when using it dry, reaching 11% on flexible plastic substrates. Paper, compared to other soft applicators, possesses the right porosity and smoothness for deposition of high quality perovskite films.

Perovskite semiconductor solar cells are a very exciting photovoltaic technology because they possess similar power conversion efficiencies to those based on conventional silicon but can be cast in thin films via precursor inks providing benefits in manufacturing. Most perovskite films in laboratories around the world are deposited through spin coating which guarantees high control of film thickness as well as morphology. However, most of the ink is expelled during deposition and is wasted. There have been efforts to develop coating techniques for deposition over large areas. The most efficient solar cells fabricated via spin coating involve adding drops of anti-solvent (i.e., a liquid with differing properties to those used in the perovskite precursor inks) during spinning which improves the morphological quality of the perovskite semiconductor films. This method is very difficult to implement when employing large area coating techniques, however, where the careful engineering of the drying processes involve heaters or gas flows to control the morphology of the perovskite film.

An international team of researchers from Italy and Iran has published a completely new method that uses a simple sheet of paper to deposit the perovskite films without a spin coater or other large area techniques such as slot-die coating or blade coating. Results of their project have been published in iScience, the open access interdisciplinary journal from Cell Press, highlighting the recipes that are required to achieve efficient solar cells with this method.

“When I joined CHOSE labs in Rome for my internship, I serendipitously noticed that leaving a piece of cleaning paper soaked in solvent over a wet perovskite precursor film, it turned brown turning into what looked like a rather promising perovskite semiconductor film. My supervisor in Rome, Prof. Brown, suggested I developed a coating method based on this discovery during my time there” described Nazila Zarabinia, first author of the work. “We worked on trying different soft applicators: the one that work best was paper possessing the most beneficial properties of porosity and smoothness” she added. The highest efficiency of a flexible cell fabricated with this Deposition via Anti-Solvent-Soaked Applicator method (termed DASSA) was 11%. The researchers believe this is a satisfying efficiency, particularly for flexible solar cells on plastic PET substrates, and utilizing a completely manual procedure. The corresponding efficiency achieved with spin coating devices with the anti-solvent method was 14.9 % so there is scope for further improvement. In the manuscript, the authors propose an automated procedure for further future optimization.

“We think this simple method will appeal to all those labs setting up a line in perovskite research who have not been able (for money or time) to buy expensive deposition equipment (a bit like manual blade coating of titania films which was widely used to enter the field in the days of dye sensitized solar cells) since it enables the deposition of the perovskite film incredibly cheaply. It can also be of particular interest to groups developing automated printing techniques by applying the anti-solvent, not on the perovskite film as usual, but on the applicator instead. Furthermore, it will be interesting to endeavor to extend this method also to the transport layers for full cell manufacturing,” commented Thomas M. Brown, corresponding author of the work.

The researchers show that soaking the paper used as an applicator in an anti-solvent increases the power conversion efficiency of solar cells by 82% compared to the solar cells where the application of the perovskite film was carried out with a sheet of dry paper.


Citation:
Fabrication of perovskite solar cells with just a piece of paper? A new method tells you how (2022, January 21)
retrieved 21 January 2022
from https://techxplore.com/news/2022-01-fabrication-perovskite-solar-cells-piece.html