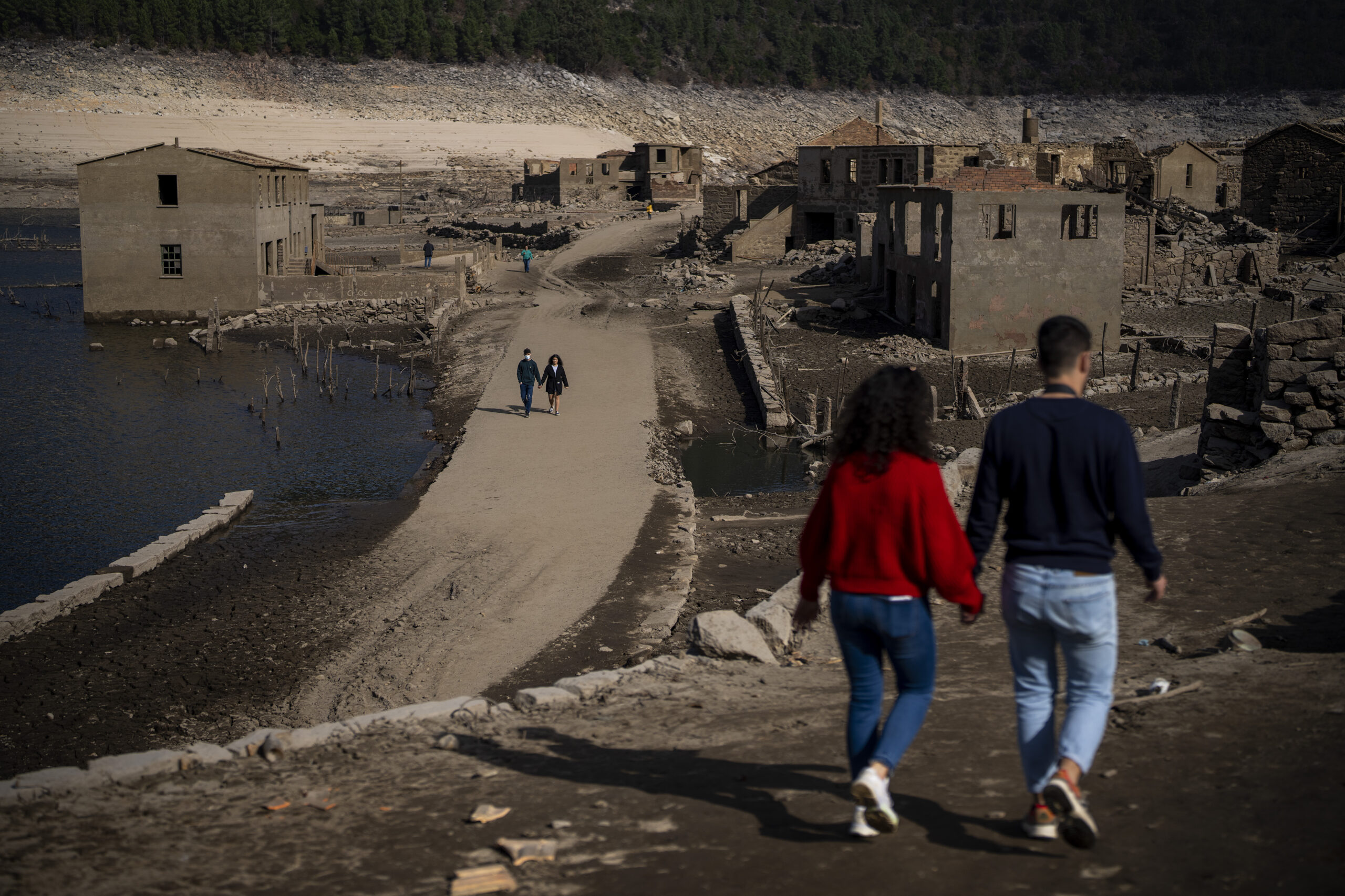 Roofs peeking out of the water have become a common sight every summer at the Lindoso reservoir in northwestern Spain. In especially dry years, parts would appear of the old village of Aceredo, submerged three decades ago when a hydropower dam flooded the valley.

But never before has the skeleton of the village emerged in its entirety in the middle of the usually wet winter season.

With almost no rain for two months and not much expected any time soon, the ruins of Aceredo are dredging up a mix of emotions for locals as they see the rusted carcass of a car, a stone fountain with water still spouting and the old road leading to what used to be the local bar.

“The whole place used to be all vineyards, orange trees. It was all green. It was beautiful,” said 72-year-old Jose Luis Penin, who used to stop at the bar with pals at the end of a day’s fishing.

“Look at it now,” said Penin, who lives in the same county, pointing at the cracked, yellow bed of the reservoir. “It’s so sad.”

While the arid zones of the Iberian Peninsula have historically experienced periods of drought, experts say climate change has exacerbated the problem. This year, amid record levels of low or no rainfall at all, farmers in both Portugal and Spain, who are growing produce for all of Europe, are worried that their crops for this season will be ruined.

In the last three months of 2021, Spain recorded just 35% of the average rainfall it had seen during the same period from 1981 to 2010. But there has been almost no rain since then.

According to the national weather agency AEMET, in this century, only in 2005 has there been a January with almost no rain. If clouds don’t unleash in the next two weeks, emergency subsidies for farmers will be needed, authorities said.

But Ruben del Campo, a spokesman for the weather service, said the below-average rainfall over the last six months is likely to continue for several more weeks, with hopes that spring will bring much-needed relief.

While only 10% of Spain has officially been declared under a “prolonged drought,” there are large areas, particularly in the south, which are facing extreme shortages that could impact the irrigation of crops.

The valley around the Guadalquivir River in Spain’s southwest was declared under prolonged drought in November. It is now the focus of a fierce environmental dispute over water rights near Donana National Park, a World Heritage wetland site. The government of the Andalusia region wants to grant water rights to farmers on land near the park, but critics say the move will further endanger a major wildlife refuge that is already drying up.

“The past two, three years have been dry, with the tendency toward less and less rain,” said Andres Gongora, a 46-year-old tomato farmer in southern Almeria.

Gongora, who expects the water he uses from a desalinating plant to be rationed, is still better off than other farmers who specialize in wheat and grains for livestock feed.

“The cereal crops for this year have been lost,” Gongora said.

Other areas in central and northeast Spain are also feeling the burn.

The leading association of farmers and livestock breeders in Spain, COAG, warns that half of Spain’s farms are threatened by drought this year. It says if it does not rain heavily in the coming month, rain-fed crops including cereals, olives, nuts and vineyards could lose 60% to 80% of their production.

But the association is also worried about crops that depend on irrigation, with reservoirs under 40% of capacity in most of the south.

Spanish Agriculture Minister Luis Planas said this week the government will take emergency measures if it doesn’t rain in two weeks. Those would likely be limited to economic benefits to palliate the loss of crops and revenues for farmers.

Neighboring Portugal has also seen little rain since last October. By the end of January, 45% of the country was enduring “severe” or “extreme” drought conditions, according to the national weather agency IPMA.

Rainfall from Oct. 1 through January was less than half the annual average for that four-month period, alarming farmers who are short of grass for their livestock.

Unusually, even the north of Portugal is dry and forest fires have broken out there this winter. In the south, crickets are already singing at night and mosquitoes have appeared — traditional signs of summer.

The IPMA doesn’t forecast any relief before the end of the month.

Portugal has witnessed an increase in the frequency of droughts over the past 20-30 years, according to IPMA climatologist Vanda Pires, with lower rainfall and higher temperatures.

“It’s part of the context of climate change,” Pires told The Associated Press.

And the outlook is bleak: Scientists estimate that Portugal will see a drop in average annual rainfall of 20% to 40% by the end of the century.

Joseph Wilson in Barcelona, Spain, Barry Hatton in Lisbon and Aritz Parra in Madrid contributed to this report.

Photograph: Visitors walk at the old village of Aceredo, re-emerged due to drought at the Lindoso reservoir, in northwestern Spain, on Friday, Feb. 11, 2022. Large sections of Spain are experiencing extreme or prolonged drought, with rainfall this winter at only one-third of the average in recent years. The situation is similar in neighboring Portugal, where 45% of the country is now enduring “severe” or “extreme” drought. Photo credit: AP Photo/Emilio Morenatti.

Copyright 2022 Associated Press. All rights reserved. This material may not be published, broadcast, rewritten or redistributed.