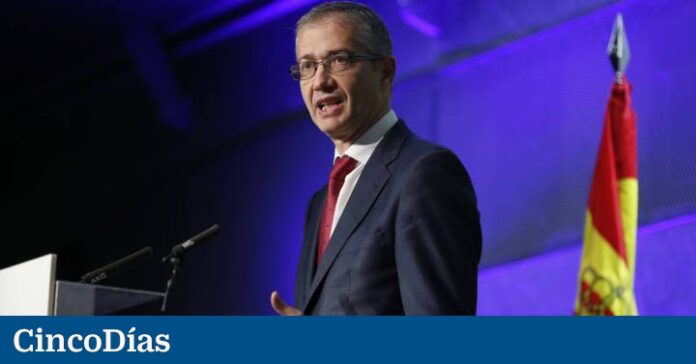 The Governor of the Bank of Spain, Pablo Hernández de Cos, has presented this Tuesday in Congress his ‘recipes’ to reinforce independence the supervisor and other regulatory bodies and, specifically, has defended raise the mandate of the position he occupies from the current six years to eight, extend the impossibility of renewal also to the directors of the bank and give a more relevant role to Parliament in their appointment.

Hernández de Cos was the first expert cited by the Commission Democratic Quality of Congress to gather ideas on how to strengthen the impartiality of the independent bodies and agencies that function in Spain, with the intention of preparing a report of recommendations that it will rise to the Plenary of Congress.

The governor considers that the legal scheme and the experience of the Banco de España as an independent financial and organizational institution can be a good point of reference in the eventual redesign from other supervisors.

In his view, Parliament should play a more relevant role in the appointment of senior bank officials and other regulators. Currently, it is up to the President of the Government to designate the Governor prior appearance of the head of the Economy before the corresponding commission of Congress to report on the candidacy.

But Hernández de Cos would see well that the candidates for governor, deputy governor and unborn councilors will appear at the parliamentary seat prior to the appointment or they had to receive their suitability endorsement. This is a system similar to that applied by the European Parliament in Election processes for senior BCE officials. He has also pointed that, for example, the Bank of England selects the governor and the deputy governors through public tender.

Although he has focused on improvements for the supervisor, the governor is in favor of unifying the procedures for appointments independent bodies and, as a general premise, considers it appropriate that all of them have mandates of more than four years, to detach them from electoral cycles, as well as “persevere” in the impossibility of renewal.

In the case of the Bank of Spain, it has asked to raise the years of mandate of their senior positions and extend to the directors the inability to renew (now they are eligible for a second term) that is already in force for the governor and the deputy governor.

For Hernández de Cos, expanding the mandate in addition to accumulating experience would serve to increase the ability to influence forums while prohibiting renewals would lower the eventual temptations of the directors to approach those who decide on his possible re-election.

The governor maintains that the independence of independent bodies must be accompanied by very high standards of transparency and accountability before Parliament, as essential elements to give them legitimacy.

Thus, in addition to proposing that the governor appear more before the Congress, bets on the elaboration of ethical codes of obligatory compliance for senior positions in these bodies that guarantee their independence of the public and private sector and avoid possible conflicts of interest.

Hernández de Cos has also introduced the concept of ‘good governance’ in the functioning of these independent bodies so that they have always present not only the principles of effectiveness, efficiency, impartiality or diligence, but also the application of procedures and decisions collegiate institutions that guarantee the pursuit of the public interest as the main institutional line of action.