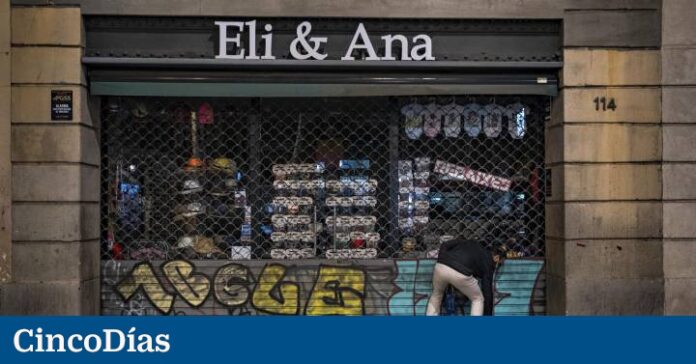 The pandemic has left unusual images. From one day to the next, the blinds of hundreds of thousands of shops of all sizes and bars, restaurants and cafes were closing, forced by the state of alarm decreed in March. Weeks of forced closure and deserted streets, but with the hope that it was a temporary situation.

The confinement is over but not the difficulties for these sectors, which since its reopening [si decidieron reabrir] They have faced restrictions of all kinds in order to stop the spread of the virus. The underlying economic crisis, the growth of teleworking, the curfew or the virtual disappearance of foreign and even domestic tourism, with the perimeter closures, have been added elements that have put the finishing touches to a terrible year.

The hospitality sector expects up to 400,000 jobs to be destroyed and nearly 80,000 establishments closed. Estimates of the Spanish Confederation of Commerce speak of a serious danger of closing 120,000 small businesses, 30% of the total, after dragging down sales that reach 50%. According to data provided by the large distribution employer, Anged, employment in commerce fell by 2.8% until November, reducing the number of affiliates by 54,000, while 63,000 of those employed were still in ERTE.

“The main research services forecast a drop in private consumption of around 14% in 2020. It is foreseeable that we will not perceive a recovery until mid-2021”, explains the CEO of Anged, Javier Millán-Astray.

This association, which includes companies such as El Corte Inglés, Carrefour or Ikea, estimated the fall in sales for this year at 25,000 million. “Spain has lost more than 50 million tourists in 2020. The recovery of this sector will set the pace of take-off of commercial activity during the coming year”, analyzes Millán-Astray.

Shops, such as hospitality, have been subject to continuous restrictions once the strict confinement ended. The last in November, due to the growth of the second wave of the pandemic. “More than a third of the trade in Spain has been forced to stop again for a month because of the restrictions”, laments the general director of Anged, who adds that the dispersion of measures between autonomies “adds more insecurity”. Anged estimates the infections associated with commercial activity at 0.8%, while the hotel industry calculates them at 3%.

“The hospitality industry has been punished by tourism, closures, even by teleworking. And there is no causality as to the origin of the infections. The treatment that has been given to the sector through the measures that have been approved is not understood ”, analyzes the general director of Aecoc, José María Bonmatí. In his opinion, this is the sector that most clearly needs “a support plan”. “It is not only the 1.7 million jobs it has, but everything that is around it. The money that is earmarked for an aid plan is what we will later save on benefits ”, adds Bonmatí.

This long-awaited rescue plan came this week, with the approval by the Government of a royal decree with support measures for hotels, commerce and tourism, focused above all on reducing fixed costs for some SMEs and the self-employed who have seen a reduction notably their income.

Reductions in rents, tax deferrals or payments of Social Security contributions, more ICO lines … A package valued by the Government at 4,220 million euros but that business sectors consider insufficient. “Given the context and medium-term forecasts, the plan is insufficient and arrives late. It should include direct aid, which has been carried out by neighboring countries. It is an essential measure to guarantee the continuity of SMEs, micro-SMEs and the self-employed in the sector ”, stated the Secretary General of the CEC, Julián Ruiz.

“We have to choose whether we want benefits or for companies to maintain activity and employment. We think that if the resources are used to guarantee their viability, they will be more productive, without forgetting that the benefits will also be necessary ”, insists Bonmatí.

In the opinion of the CEO of Aecoc, the future of these sectors will depend on these measures that are approved during these days. On Monday 28, the Minister of Industry, Commerce and Tourism, Reyes Maroto, will address possible direct aid with the autonomous communities.

Like the CEO of Anged, his counterpart at Aecoc sees two clearly differentiated parts of 2021, although he also recalls that this pandemic has shattered any medium and long-term forecast. “These sectors go hand in hand with consumer confidence, purchasing power … We see this as more favorable for the second semester”, says Bonmatí, although he does not anticipate a recovery as such until 2023. “It will depend a lot on the deterioration that causes this crisis in the business fabric, that is why the measures that are approved now are so important. We are entrusting everything to European funds, which are excellent news, but they are also a great responsibility ”.

But if there are two activities that have been able to avoid the crisis in a better way, they are mass consumption and food distribution. In the case of the latter, 2021 will not be a year of recovery but of readjustment to the activity prior to the pandemic, if it finally gives up. “When the operation of the hotel industry is normalized, the purchase of food in homes will be rebalanced”, assesses Ignacio García Magarzo, general director of Asedas, the employer’s association of the supermarkets sector that brings together Mercadona or Dia. However, companies in this sector have also suffered. “Last year 85 million tourists arrived who this year have not come. We have had a lot of impact in certain areas, hundreds of supermarkets that live off tourism and have been very affected.

And another aspect to take into account will be the consumer who leaves the pandemic. “If an economic crisis comes, regardless of when normality recovers, consumer behavior will have to be seen. It is where you will have to be vigilant. We don’t know how normality is going to be, ”says Magarzo.

Aspects that put more uncertainty in the face of a 2021 that leaves behind the nightmare lived in this 2020.

Chaos broke out in the second week of March. The virus, definitely, was in Spain, and although the state of alarm had not yet been decreed, the suspension of classes and the first recommendations not to leave the house left images of fear. Crowded supermarkets, full, linear carts that emptied in hours. Fear of the virus unleashed hoarding and put the entire food chain to the test.

But this one responded. Not without effort, but those images stopped repeating themselves as the days passed. “We have been able to demonstrate the great model of food distribution that our country has in the face of the greatest challenge we have ever had, especially in the first weeks of confinement in March”, describes the general director of Asedas, Ignacio García Magarzo. “We made it clear that food was not going to be an added problem. For me it is a milestone and it has been thanks to the efforts of workers and employers ”, he adds.

The data says so. According to those managed by Aecoc based on Nielsen studies, Spanish supermarkets were the ones that suffered the least stock breaks during that month of March compared to the rest of European countries. Only 7.2% of the products were scarce, compared to 20% in France. “This thanks to a tremendously balanced distribution structure of small businesses, large surfaces and proximity,” says the CEO of Aecoc, José María Bonmatí.

That response demanded higher costs from operators, especially logistics, but also personnel and, in addition, adaptation to the online channel, the demand for which soared. From being a channel that barely reached 2%, the pandemic has raised it to 4%, a percentage for which years were required in a normal situation.

“There has been a great effort from companies to adapt to this new demand. Before it was niche and now, due to mobility limitations, people who prefer not to go to stores, there has been an increase. It has been an opportunity but it has implied a great effort, but the challenges that it entails are still pending: economic, social and environmental sustainability ”, adds García Magarzo.