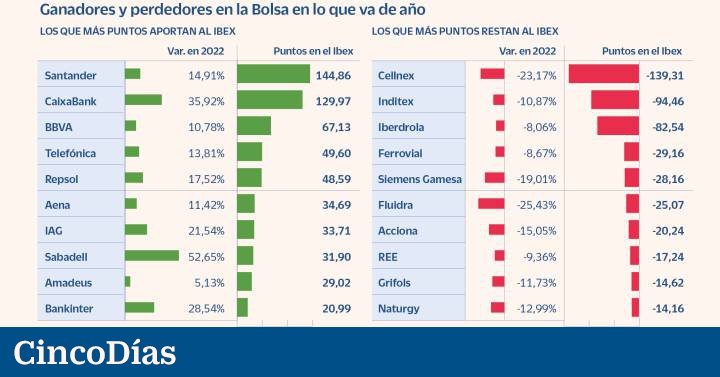 No clear trend. This is how the behavior of the markets can be defined so far in 2022, a period in which volatility has become the prevailing trend. Although no asset escapes instability, the stock market is one of the most affected. A good example is the performance of the Ibex 35. After several fluctuations on one side and the other of the line that separates profits from losses, the selective Spanish cannot chase away the ghosts and so far this year it limits profits to 0, 27%.

Behind this weak behavior there are winners and losers. Up to 21 listed in the selective (60%) record losses, compared to 14 that escape sales. Although within the first group Fluidra (-25.4%) is the most punished company, the ones that subtract the most points from the selective are Cellnex (-23.2%), Inditex (-10.9%) and Iberdrola (-8%). ). In other words, three of the most capitalized firms on the Ibex and with the most weight on the Spanish Stock Exchange. With their cuts, between the three they subtract more than 315 points from the Ibex.

Some distance behind are other big names on the Spanish stock market such as Ferrovial (-8.7%), Siemens Gamesa (-19%), Acciona (-15%), Red Eléctrica (-9.4%) or Naturgy (- 13%). Although their cuts are bulky, their lower weighting leads them to reduce the punishment for selective behavior to 109 points.

Regardless of their weight, one of the hallmarks of most of the listed companies that have concentrated the punishment of investors so far in 2022 is their marked defensive profile and their bulky debt. Now that central banks are determined to contain price spikes to prevent inflation from scuppering the nascent recovery, expectations of monetary normalization have translated into rising bond yields.

The cost of financing remains very close to historical lows, but as central banks speed up the withdrawal of stimuli, it will pick up. At the moment the companies continue to enjoy loose financial conditions, but investors have taken advantage of the revaluations that many of these firms accumulated since the lows of the pandemic to raise cash. Bearish investors have also contributed to this process. Hedge funds, which in recent years had banks in their sights, have joined the portfolio rotation and concentrate bearish bets on utilities, pharmaceuticals and growth companies such as Cellnex.

While waiting for the companies to publish the accounts for the whole of 2021, as of September 30 Iberdrola led the ranking of the most leveraged listed companies. The company chaired by Ignacio Sánchez Galán had a liability of 37,219 million, a figure that places the ratio of debt to EBITDA at 4.56 times. That is, you have a heavy financial burden. The positive part is that the average life of its debt portfolio exceeds six years and 68% of the liabilities were at a fixed rate. These levels allow the company to be better prepared for a possible normalization of monetary policy.

The strong investment activity undertaken by Cellnex in the first nine months of 2021 to generate new income and incorporate new assets translated into a year-on-year increase in debt of 4,837 million. At the end of September, its liabilities reached 8,613 million, which raised the debt to EBITDA ratio to 6.46 times.

Inditex, a firm that instead of debt has cash –9,569 million at the end of the third quarter–, has lost more than 9,660 million on the Stock Market so far this year. In recent days, the shares have managed to recover 25 euros and seek to leave behind the minimum of 12 months. Even so, its capitalization is still far from the 100,000 million that it last registered in November. RBC analysts see the penalty as unjustified and see current levels as a good opportunity to take positions on the stock.

While the expectations of monetary normalization take their toll on the most leveraged firms and those with a greater defensive profile, the rise in yields in the heat of rumors of interest rate hikes has become the catalyst for the banks’ rallies. It is early for the rise in rates to translate into an improvement in the interest margin, but investors have not hesitated to increase their exposure to entities, taking advantage of the deep discounts they offered. The five entities that are part of the Ibex contribute nearly 400 points.

Although Telefónica is one of the most leveraged firms, corporate movements in the sector in Europe have served as a boost for its shares to rise 12% in the year and contribute nearly 50 points to the Ibex. Along with the teleco, the good performance of tourist companies stands out, driven by the lifting of restrictions as vaccination progresses, and Repsol, which takes advantage of a Brent at 2014 highs.