Madrid, 30th June 2022. Cabify and Toyota have joined forces to present the first fleet of VTC (ride-hailing) vehicles that use hydrogen as a source of energy in Spain. Toyota has already delivered four first-generation Toyota Mirai vehicles to the fleet, which is set to increase by the end of the year.

Cabify’s bet on hydrogen-powered Toyota’s fuel cell electric vehicles is of great significance for the mobility sector, as it is the first time that fuel cell technology has been incorporated as an emission-free alternative for VTC customers in Spain.

The Toyota Mirai fleet, which will operate at Vecttor, uses hydrogen as an energy source to generate, within the fuel cell, the electricity needed to power the electric motor, generating water as the only waste in the whole process. The refuelling time for these vehicles is only 3-5 minutes, similar to that of a conventional combustion vehicle, and offers a range of around 550 km.

The Toyota Mirai will be available within the Cabify Eco category, designed for corporate mobility customers where they are included only in electrified vehicles (hybrids, plug-in hybrids and electric). They will also be available in the other categories for private users, such as Cabify, “Cuanto Antes” or Kids.

Refuelling will take place at the private hydrogen station that Enagás subsidiary Scale Gas has at Avenida de Manoteras 34 in Madrid. It was opened in January 2021 and is the first refuelling station in Spain that allows hydrogen to be refuelled at 700 bar.

Miguel Carsi, President and CEO of Toyota Spain, commented at the presentation of this agreement “the relevance of having the technology ready to provide Cabify with the first hydrogen-powered VTC fleet in Spain. Toyota is ready to continue progressing towards zero-emission mobility, where hydrogen plays an important role as an energy vector. In his speech, he also thanked the company Enagás and its subsidiary Scale Gas for facilitating the refuelling of this fleet at its hydrogen plant.

Daniel Bedoya, Regional Manager of Cabify in Spain, said that “this alliance with Toyota is another step forward in our commitment to accelerate sustainable mobility, by innovating and supporting alternatives that make life easier for people and companies, and make our cities better places to live. Being accompanied by companies such as Toyota and Enagás is a guarantee that the journey will be a success”.

In the words of Arturo Gonzalo, CEO of Enagás, “this agreement is in line with the plan outlined in the Hydrogen Roadmap of the Ministry for Ecological Transition and the Demographic Challenge. It’s an example of the collaboration between companies and represents a milestone in sustainable mobility and a further step in Enagás’ commitment to the decarbonisation of transport”. He also recalled that in 2021 “we launched, through Scale Gas and together with our partners, the first hydrogen refuelling station in Spain for long-range electric fuel cell vehicles, which will supply this fleet of Cabify vehicles and with which we continue to contribute to the integration of alternative fuels”.

With this operation, the three companies reinforce their commitment to decarbonise cities, especially in sprawling urban areas. Hydrogen is a key energy vector in this process, as it is an unlimited energy source that can be obtained in a sustainable manner, is easy to store and transport, and can be used in many different areas, from transport to heating and cooling homes and buildings.

For its part, Cabify continues to advance its commitment to decarbonisation through innovative technologies. In 2018, Cabify became the first carbon-neutral platform in its industry, and since then it has been offsetting its emissions and those of its passengers, as well as fulfilling an annual reduction commitment. In addition, the Spanish company recently presented its Sustainable Business Strategy 2022-2025, the guide that will mark Cabify’s projects and which is firmly committed to combating climate change, with the aim of decarbonising the fleet connected to its app in Spain and Latin America. Cabify maintains the goal that 100% of trips on its platform should be in decarbonised or electric fleets by 2025 in Spain and 2030 in Latin America. 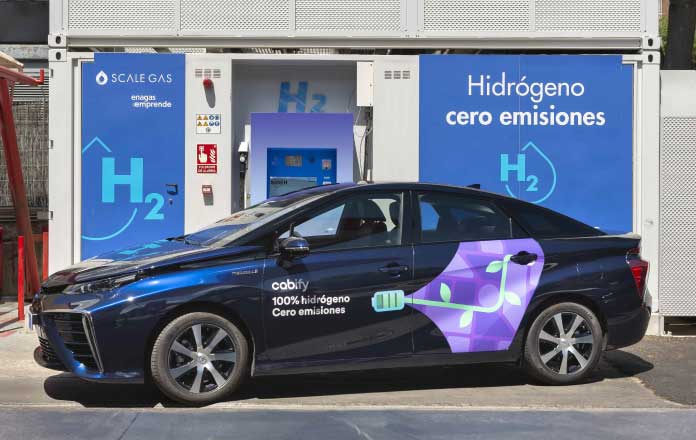 Toyota and the hydrogen society

Toyota, with its Toyota and Lexus brands, is a world leader in the marketing of electrified models – i.e., hybrid, plug-in hybrid, battery electric and fuel cell vehicles – with more than 20 million electrified cars sold worldwide and 400,000 units sold in Spain since 1997. In order to meet environmental challenges, the company is putting hydrogen technologies at the forefront by promoting the use of this energy source as one of the sustainability pillars of tomorrow’s society.

Cabify is a Spanish multi-mobility platform for people and objects that offers various alternatives to reduce urban travel in private cars, taking advantage of technology to make cities better places to live. And all of this, while being an economically, environmentally and socially sustainable company. Cabify has been transforming the way people move around the city for 10 years, has more than 42 million registered users and 1,200,000 collaborating drivers including taxi drivers. After being founded in Madrid, the company spread to Latin America within a few months and is currently present in Argentina, Chile, Colombia, Ecuador, Spain, Mexico, Peru and Uruguay.

Enagás is a European operator of gas transmission systems with 50 years’ experience in the development, operation and maintenance of energy infrastructures. The company operates in eight countries, has more than 12,000 kilometres of gas pipelines, three underground storage facilities and nine regasification plants. It is the main natural gas transporter in Spain and the Technical Manager of the Gas System. The company is committed to becoming carbon neutral by 2040 and to developing projects that promote renewable gases

-hydrogen and biomethane-, sustainable mobility and energy efficiency, among other areas.

Scale Gas is a subsidiary of Enagás Emprende, Enagás Corporate Venturing for the investment and acceleration of startups and innovative technologies in the field of energy transition, with special emphasis on renewable gases (biogas and hydrogen), sustainable mobility, energy efficiency, digitalisation and cleantech in general.