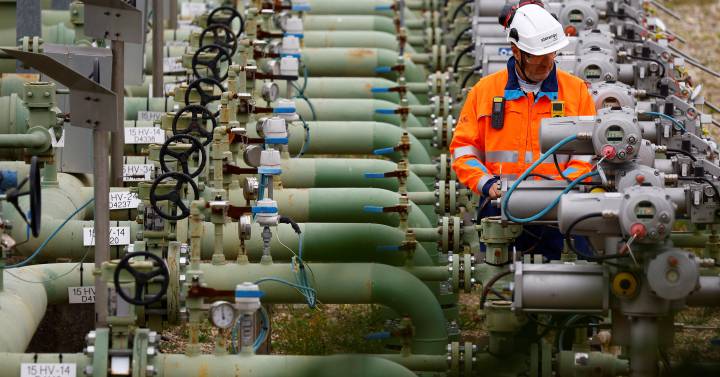 Times of crisis call for desperate measures. The President of the European Commission, Úrsula Von der Leyen, has dedicated most of her State of the Union speech to the energy crisis that the community bloc is experiencing. Among a summary of measures and good intentions, many still awaiting technical details, an acronym slipped in to the bewilderment of most Europeans: the TTF, the reference index in the gas market. The Community Executive has called for its reform, a step forward in greater state intervention in the energy markets.

What does the TTF stand for and why is it so important for Europe?

TTF, which stands for Securities Transfer Facility, is the Dutch index used as a benchmark for the price of gas in Europe. The choice is not casual or arbitrary: 73% of the total volume of gas that arrived in Europe in 2021 was negotiated in the Netherlands. This was not always the case until 2015-2019, when it overtook the UK market (NBP) as the leading stock on the continent.

The popularity of the Dutch market has a lot to do with the technical foundations that put it at center stage today. “The TTF became the most liquid and traded reference in Europe thanks to abundant infrastructure with plenty of available capacity at all interconnectorseasy access to the global market for liquefied natural gas (LNG), solid underground storage capacity and gas pumping from Groningen (the largest reserve of this hydrocarbon in Europe) ”, highlights Greg Molnar, analyst at the International Energy Agency.

It is a “virtual” market, not physically located in one place, unlike its US counterpart, the Henry Hub. In the United States, futures contracts are fixed in addition to price and location: the supply travels through a series of interstate connections that are located in the state of Louisiana, east of New Orleans. The TTF, on the other hand, takes into account the gas that enters the 50 access points of the Dutch interconnected system. These entrances allow entry from pipelines, LNG carriers and local reserves, but there is no single central point.

What is the problem with the TTF?

Despite the interest of buyers and sellers, the price of the TTF has tripled in the last year. The Von der Leyen’s main criticism is that the TTF has not been adapted to a European gas market that “has changed drastically”. The data supports it: the block has received until August 65% more LNG supply that reach the continent by sea. This increase seeks to compensate for the decrease in the arrival of Russian gas through gas pipelines, which represented 35% of total imports in 2021 and today only reaches 20%.

By changing the sources of supply that reach the European Union and in particular the Netherlands, the Dutch infrastructure is operating at maximum levels. In particular, local LNG regasification capacity is above 90% of its capacity. As the TTF only considers the supply already present in the network of the Netherlands, any type of limitation directly affects the available supply and, therefore, the price in the entire block,

Sources of the sector in Spain, country that has 35% of the European LNG storage capacity, highlight this bottleneck and its impact for the entire bloc. “The index is weighed down by the existing congestion to transport gas to central-eastern Europe,” they say.

The president of Naturgy, Francisco Reynés, also criticized the Dutch TTF at the beginning of the month since it only represents a part of the total European gas market but its volatility affects the entire bloc. “It is at historical maximums and already does not respond to a supply-demand balancea,” Reynes said.

The problem is that, despite the lack of infrastructure available in other EU countries, the predominant position of the TTF leads LNG carriers to use the TTF as a reference index or link their prices to it, even if they need to deliver gas in other places in Europe that have their own local markets. 62% of LNG trading contracts use the TTF as a variable, according to data from the financial agency S&P Global Commodity. In other words, what happens to this index directly affects the ships that arrive in the region.

Are there other alternatives?

In 2021, 73% of the total volume of gas that arrived in Europe was negotiated in the Netherlands, although this does not mean that there are no other alternatives on the continent. Trading in the Dutch market far exceeds the domestic demand of this country, which only represents 1% of the total traded, but also the European demand in general, which reaches only 10% of the volume traded.

From SEDIGAS, the Spanish Gas Association, they point out that the TTF “it only responds to stimulate the reduction and restriction of internal demand in central Europe”. The employer considers that the index is decoupled from international LNG prices, such as the JMK index of the Asian markets, as well as the Spanish PVB, French PEG, and other European indicators.

The Oxford Energy think tank states that beyond the indices of the Netherlands and the United Kingdom, there are 9 other relevant markets in the regionalthough it distinguishes between “active” and “poor”.

Although with much less liquidity, fewer bidders and fewer incentives to participate, smaller markets such as the Spanish have come to register a strong price difference with the TTF. SEDIGAS sources point out that this ‘spread’ may have reached 100 euros, both in the cash market and in one-month futures.

What other options can the EU try?

The European Commission plans to create a benchmark for liquefied natural gas (LNG) to set fair, market-based prices for gas imports, according to multiple international agencies. This decision seeks to alleviate price differences between the different gas centers in the block, reduce market volatility and better capture the available infrastructure of the 27.

Brussels intends a “parallel and more harmonized” parameter, which brings together “the different EU indices for wholesale transactions.” This decision would “better represent the realities of the markets.” This would not require creating new indicators, but giving greater relevance to the existing ones.

The documents of the European Commission emphasize that nothing obliges the operators to negotiate in the virtual market of the Netherlands, although the Exchange credibility and stable performance have made it possible to provide the system with a certain stability, even in times of crisis. A hasty change in the rules of the game could turn different parts of the market towards OTC (over the counter) operations, but at the risk of reducing transparency.

SEDIGAS points out that it is “necessary to find an alternative, another market index that is liquid and representative of the world price of LNG”. From the organization they warn that “nor we can have nothing”, since this would fuel prices to be set arbitrarily.

Other sources from the energy sector point out that the creation of one or even several new indices may be a solution, but only in the medium term, and warn that it should be analyzed in detail with the industry.