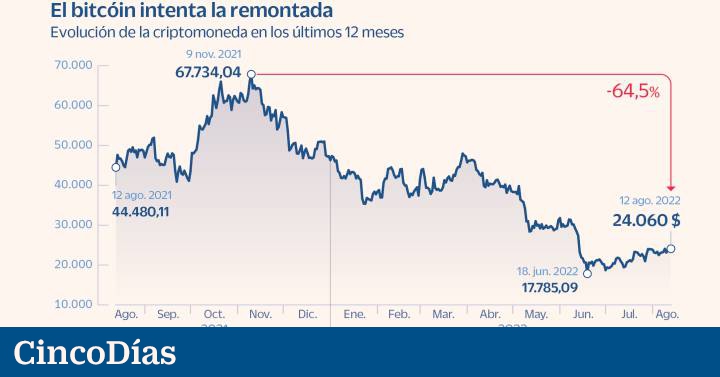 Bitcoin is trying to come back after the debacle that has registered its price so far this year. Risk appetite has returned to equities, on expectations that the pace of the Federal Reserve rate hike may moderate, and the shock wave is reaching cryptocurrencies. From the minimum below 18,000 dollars marked at the end of June, its price recovers 34% and has come close to 25,000 dollars this week, a considerable recovery that is in any case very far from being able to compensate for a loss in value close to in the year at 50%.

The prices of cryptocurrencies have suffered a general collapse following the rise in interest rates in the US. Their rise in recent years has been driven precisely by cheap money and the rain of liquidity that central banks have injected, which led to the constant search for profitability at the cost of assuming greater and greater risks. With the withdrawal of monetary stimuli, the most volatile and risky assets have been the first to suffer, with a prominent place for cryptocurrencies.

Price drops in this market have indeed been causing liquidity problems in recent months for several trading platforms, which are struggling to respond to requests for refunds from their clients. The most notorious example has been that of the American platform Celsius Network, which in mid-June announced the suspension of transactions and withdrawals of funds from its clients, thereby causing a 15% drop in the price of bitcoin. Just a month later, he filed for bankruptcy.

Other companies in the sector such as Coinbase and Gemini announced headcount reductions of 10% and 18%, respectively, and warned of the arrival of a winter for cryptocurrencies.

Coinbase this week announced a $1 billion second-quarter loss and a 64% drop in revenue.

Despite the tough environment for the sector, the slightly more optimistic tone for the financial markets as a whole is giving cryptocurrencies a slight respite. The price of bitcoin, now on the verge of $24,000, has managed to return to mid-June levels and its rise has encouraged the prices of companies closely linked to its trading, such as the aforementioned Coinbase, Hive Blockchain, Silvergate or Bit Digital.

The cryptocurrency sector has also received a notable boost this week when it was learned that BlackRock, the world’s largest fund manager, is offering to invest in bitcoin to its large institutional clients. Despite the fact that it is an unregulated, volatile asset that has suffered a strong depreciation, the manager ensures that these large clients maintain their interest in crypto assets.