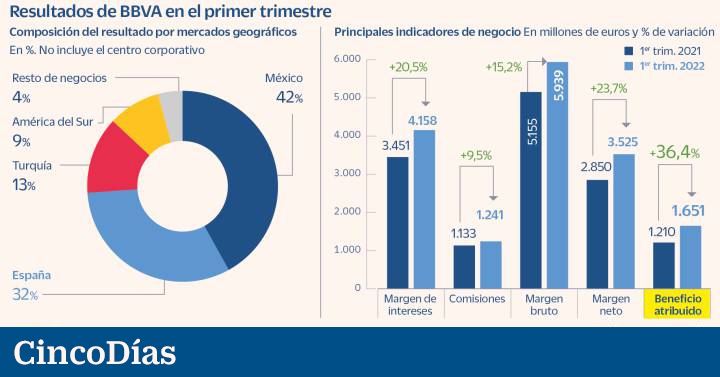 BBVA has achieved in the first quarter of 2022 the best recurring result in its history. The bank led by Carlos Torres Vila has announced a profit of 1,651 million euros, which represents 36.4% more thanks to the commercial impulse. And it is that, the entity has been favored by the generation of recurring income that has allowed it to obtain the highest net margin in its history.

Specifically, with regard to the typical banking business income, BBVA increased the gross margin by 21.3% to 5,939 million euros. It was driven by the gradual increase in interest rates, especially in Mexico, Turkey and South America, so that the interest margin rose by 26.3% to 4,158 million. Likewise, it was supported by an increase in net commissions (+14.1%) to 1,241 million euros. Likewise, the entity registered its best net margin in history with 3,525 million and an increase of 31.9% at constant rates.

The results were well received by the market in the early stages of the session on the stock market and shares soar about 5%.

For geographic markets, Mexico it was once again the engine of the bank, with a profit of 777 million, 49% more. The Latin American country represents 42% of the bank’s total profit. In Spainthe result was 601 million (+62.3%), the best result in the last 12 years and increased its contribution to the group to represent 32% of the group’s result.

In Turkey, BBVA’s third market, the entity obtained a result of 249 million (representing 13%). Precisely, the bank is in the middle of a takeover bid to acquire the participation of its Turkish subsidiary Garanti, which it does not yet control, in an operation that will amount to a maximum of 31,595 million lira (1,985 million euros) and which plans to close on May 18. Recently, BBVA announced that it has already exceeded 52% of the capital in the Turkish bank. With regard to the Turkish subsidiary, the CEO of BBVA, Onur Genç, expressed the good trend. “We say it over and over again and it is that we have the best bank in the country. Year after year we have a better profit before provisions and we see the same trends,” she valued.

For its part, operating expenses increased by 8.5%, up to 2,415 million. In that sense, he was penalized by inflation. However, the income statement in the coming quarters should reflect the impact of the restructuring plan carried out in 2021 and which involved an ERE in which 2,725 bank employees left and the closure of 480 branches. With this plan, the entity expects to save about 250 million a year in costs. Despite the increase in costs, the efficiency ratio improved by 4 percentage points to 40.7% and, according to the entity, is the best figure among comparable banks in Europe.

In regards to the cost effectiveness, the bank increased the adjusted ROTE ratio by 6.1 percentage points to 15.9%. BBVA was already among the most profitable banks in the Spanish market and has accelerated in the last three months. Their The goal is to achieve a ROTE of 14% by the end of 2024 and it is already above that level.