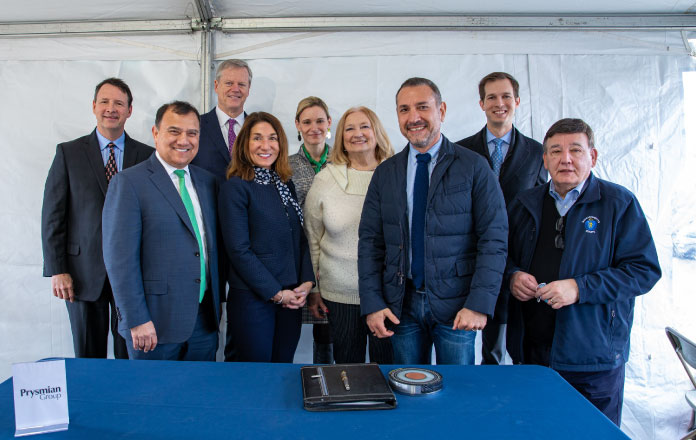 SOMERSET, Mass. – February 17, 2022  – Avangrid Renewables, a subsidiary of AVANGRID Inc. (NYSE: AGR), and Prysmian Group today announced an historic milestone in the development of the offshore wind industry in the United States and AVANGRID’s Commonwealth Wind project, as Prysmian Group finalized an agreement to acquire a 47 acre parcel at the former Brayton Point coal plant in Somerset where it will construct the first facility in Massachusetts for the manufacturing of offshore wind components. The Prysmian Group facility, which will manufacture subsea transmission cables to bring the clean power generated by offshore wind to the electrical grid, was included as part of Avangrid Renewables’ 1,232 Megawatt (MW) Commonwealth Wind project. Commonwealth Wind was selected by Massachusetts in December 2021 as part of the state’s third competitive procurement for offshore wind power.

“AVANGRID is proud to be a leader in the U.S. offshore wind industry and deliver transformational investments that create quality jobs, support local economies, and advance the development of a local supply chain for the growing U.S. market,” said Chairman and CEO of Iberdrola and Chairman of AVANGRID Ignacio Galán.“Today marks an historic milestone in the United States’ and Massachusetts’ transition to a clean energy future, as we celebrate this agreement to build a new cable manufacturing facility at Brayton Point. Drawing on Iberdrola’s global offshore wind experience, we are uniquely positioned to help states like Massachusetts capitalize on the opportunities presented by this new industry.”

“We are very pleased with the progress of our project to build a new plant in Brayton Point,” commented Hakan Ozmen, EVP Projects Business at Prysmian Group. “I would like to extend particular thanks to the Massachusetts state government for its attention to this important project, which will make it possible to convert the area home to the former Somerset coal plant to production in support of the energy transition in the USA. Prysmian Group already has a significant presence in the USA and the new plant will allow us to provide even closer support to our customers and gain a strong competitive advantage in a market expected to undergo sharp growth, with the goal of 30 gigawatts of new capacity to be installed by 2030 under the Biden Plan.”

“The Commonwealth has taken aggressive, nation leading steps in our effort to secure cost-effective offshore wind energy that contributes to our goal of reaching net zero emissions by 2050 and provides critical energy reliability,” said Governor Charlie Baker. “The construction of the Prysmian Groups new facility at Brayton Point will have considerable positive impacts on the state, the regional workforce, and local economies and we are pleased to join so many partners here today to celebrate this milestone.”

“In December 2021, our Administration selected an additional 1,600 megawatts of clean and affordable energy that will directly benefit both ratepayers in the coming years and the environment by reducing the release of greenhouse gas emissions here in the Commonwealth,” said Lieutenant Governor Karyn Polito. “We are beginning to see the significance of that announcement today, with the planned construction of the new manufacturing facility at Brayton Point, which will have a positive lasting impact on the Town of Somerset and the surrounding region.”

“AVANGRID is proud to be at the forefront of the offshore wind industry’s growth, as we plan to invest over $10 billion to build our portfolio of more than 2,400 megawatts to serve New England customers,” said Dennis V. Arriola, AVANGRID CEO. “Our Commonwealth Wind project represents the full potential of a clean energy future – abundant, affordable energy, thousands of local jobs and transformational economic development, the creation of a diverse and equitable workforce, and a brighter future for historic industrial communities.”

Brayton Point is a former 1,600 MW coal-fired power plant which was commissioned in 1963 and decommissioned in 2017. The site was identified by AVANGRID and Prysmian Group as an ideal location for local offshore wind manufacturing due to its waterfront industrial location and large acreage. Through a $200 million investment, Prysmian Group will construct a facility to manufacture subsea transmission cables, and will design, supply, install and commission cabling for AVANGRID’s Commonwealth Wind and Park City Wind projects.

In December 2021, Commonwealth Wind was selected by Massachusetts through its third competitive procurement process for offshore wind power. The project represents the largest offshore wind project in New England and will create 11,000 full time equivalent jobs over the project’s lifetime while generating enough energy to power 750,000 homes annually.

“In developing the Commonwealth Wind project, our team is tremendously proud to deliver Massachusetts’ first offshore wind manufacturing facility and realize the dream of long-term manufacturing jobs on the South Coast,” said Bill White, President and CEO of Avangrid Renewables Offshore.  “By working with an industry leading partner in Prysmian, this partnership is a great example of how we can transform 20th Century infrastructure into clean energy hubs for the future to serve as anchors for long term jobs and investment.”

“The Baker-Polito Administration was a first mover in securing offshore wind generation to meet the Commonwealth’s climate goals while positioning the local supply chain to support this growing industry,” said Energy and Environmental Affairs Secretary Kathleen Theoharides. “Today’s announcement to construct the new facility at Brayton Point is a major step forward in our ongoing efforts to achieve net zero emissions while providing significant economic benefits for the Commonwealth’s residents.”

In addition to the Brayton Point facility, Commonwealth Wind will establish Massachusetts’ second offshore wind port in Salem Harbor, which will provide another anchor for the creation of long-term jobs to support the emerging offshore wind industry.

Commonwealth Wind will also deliver a host of energy, environmental, and workforce benefits to Massachusetts, including a first-in-the-nation partnership to supply offshore wind power to municipal utilities, significant investments in the development of a diverse, inclusive and equitable workforce, and an investment in New Bedford to create an offshore wind operations and maintenance control center.

“Clean and affordable energy, local family-sustaining wages, new investments in communities up and down the Massachusetts coast—that’s the promise of offshore wind development, and today, that promise is being kept,” said Senator Edward J. Markey, Chairman of the Senate Environment and Public Works Subcommittee on Clean Air, Climate, and Nuclear Safety and author of the Offshore Wind American Manufacturing Act. “This announcement will not only help power clean energy revolution in the Commonwealth, but help us build a robust domestic offshore wind supply chain and continue the South Coast’s leadership in that revolution.  I commend those involved in this landmark project, and look forward to transforming bolts into volts.”

“This is a great day for Somerset and a huge step towards transforming Brayton Point into the clean energy hub we’ve known it could and should be,” said Representative Patricia Haddad (D-Somerset). “The community has worked tirelessly to reinvigorate this site and I am thrilled to see this vision become a reality today.”

“With reports of rising sea levels in Massachusetts and elsewhere, I’m proud that the Commonwealth is not slowing down when it come to leading in offshore wind development,” stated Senate President Karen E. Spilka (D-Ashland). “This latest step brings us closer to our goal of a robust, integrated offshore wind industry here in our state, which will provide good jobs for our residents and help our entire nation reach our clean energy goals.”

“I am thrilled that Brayton Point has been chosen for a state-of-the-art facility that will be home to over 150 high skilled jobs, anchoring Somerset and the SouthCoast at the forefront of our Commonwealth’s offshore wind industry,” said State Senator Michael Rodrigues (D-Westport), Chair of the Senate Committee on Ways and Means. “This is a game changer for our community and I applaud Prysmian and Avangrid Renewables for recognizing the economic potential of our region and making a long-term commitment to investing in our workforce.”

“This announcement is a huge boost for the Commonwealth’s growing offshore wind industry and offers significant benefits to the Somerset and surrounding communities,” said Jeffrey Roy (D-Franklin), House Chair of the Telecommunications, Utilities & Energy Committee. “Having a manufacturer of components necessary for the wind infrastructure in Massachusetts offers economic development benefits and helps us achieve our goals under the 2021 Roadmap Bill. I look forward to many more advancements in this industry which boost the economy and help to reduce global warming at the same time.”

In January 2022, Avangrid Renewables announced the completion of the restructuring of its existing Vineyard Wind joint venture to become the largest offshore wind supplier in New England.  In total, Avangrid Renewables has a projected offshore wind pipeline of 5.3 Gigawatts (GW) on the East Coast of the United States – enough to power more than two million households. In addition to Commonwealth Wind and its 50% stake in the first-in-the-nation Vineyard Wind 1 project (800 MW total), AVANGRID owns 100% of Park City Wind (804 MW to Connecticut) and Kitty Hawk Offshore Wind (2500 MW off the coast of North Carolina).