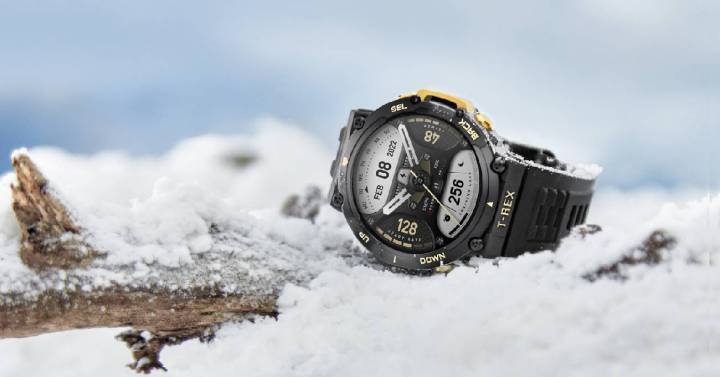 One of the great references when buying a smart watch is Amazfit. The Asian manufacturer boasts a catalog beyond any doubt, as well as a series of tricks to make the most of its interface. And now they just introduced the amazfit t rex 2, an off-road smartwatch that will accompany you everywhere.

say that this successor to the acclaimed Amazfit T-Rex It has a significantly higher price, but in return it is much more resistant, having resistance to extreme temperatures and GPS, the sensor that was missing from the previous model.

On an aesthetic level, the truth is that the differences between the Amazfit T-Rex 2 and the Amazfit T-Rex they are minimal, although that is not a problem either since in terms of design we are facing an attractive, functional and very resistant model.

Features of the Amazfit T-Rex 2

For a start, This model has high-resistance polycarbonate finishes, In addition to military-grade certification that guarantees that this smartwatch is resistant to dust, water, extreme temperatures (you can use it in environments at -40ºC or 70ºC), shocks and falls… Let’s go a smartwatch to use wherever you want.

To this must be added his Dual band GPS and five satellites to get the best accuracy. Another of the great novelties of this smart watch compared to its predecessor has to do with autonomy. More than anything because the Amazfit T-Rex 2 boasts a 500 mAh battery to guarantee up to 24 hours of use. We could not forget its 1.39-inch AMOLED screen that offers image quality beyond any doubt.

As expected in a smartwatch with these characteristics, the Amazfit T-Rex 2 has all kinds of sensors capable of monitoring all the steps you takeincluding stress levels, SpO2 sensor and 24-hour heart rate monitor, in addition to more than 150 sports modes including sports as curious as fishing, hunting or surfing.

As for the launch date and price of the new Amazfit smartwatch, saying that this model has just hit the market at a price of 229 euros. A figure that far exceeds its predecessor, but in return we see an improvement in the screen, resistance and autonomy, so the work done by the company has been simply impeccable.

Without a doubt, this smartwatch is going to position itself as one of the best off-road smartwatches you can buy today. And seeing its price, it is a real bargain.