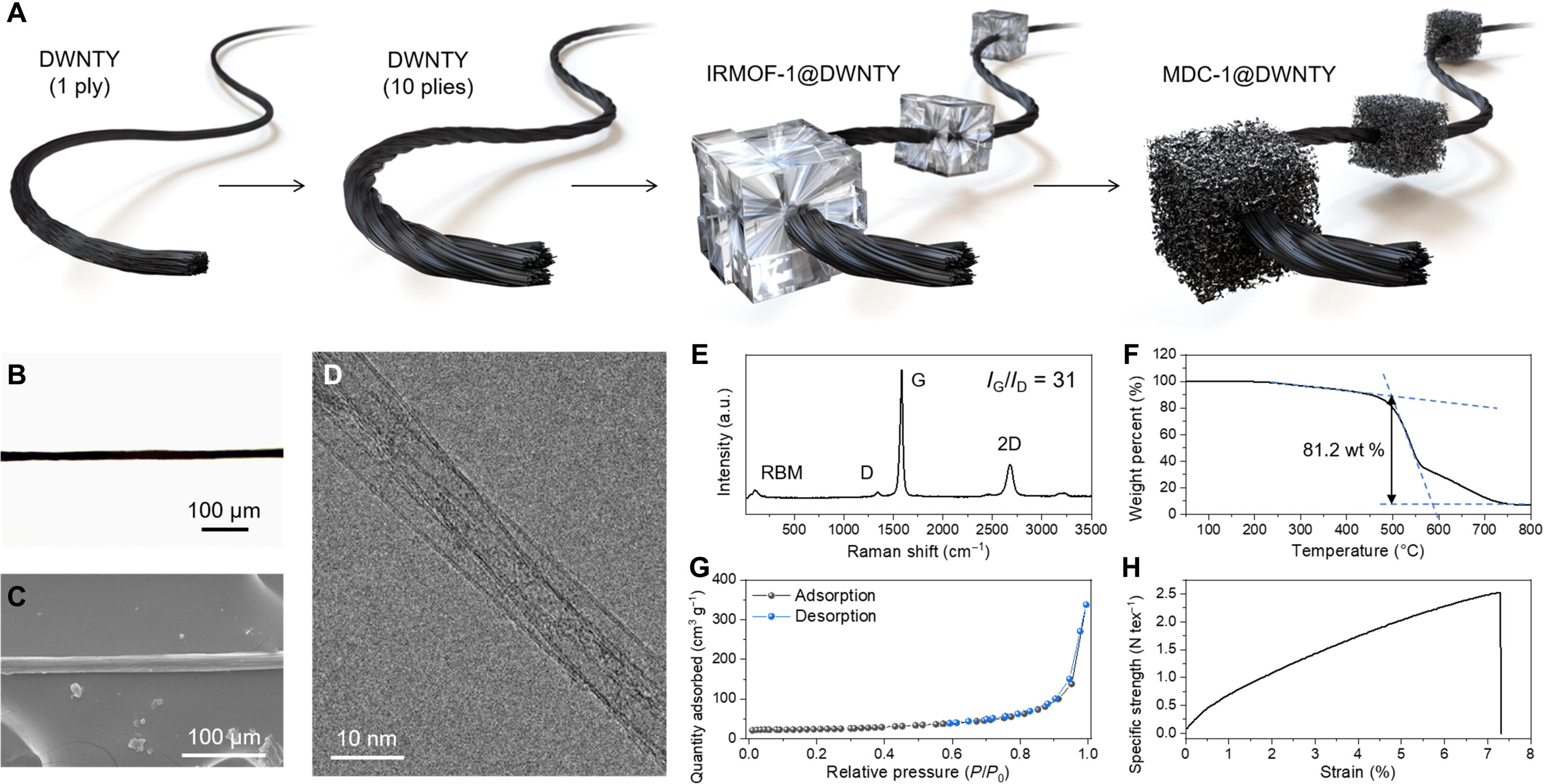 Fiber-type solid-state supercapacitors can provide a stable power supply for next-generation wearable and flexible electronics. Typically, high charge storage and superior mechanical properties can be integrated into a single fiber to realize fiber-type, solid-state supercapacitors. In a new report now published in Science Advances, You Wan Na, Jae Yeong Cheon and Jae Ho Kim and a team of scientists in advanced nanohybrids and composite research, in Korea, designed a “jeweled necklace”-like hybrid composite fiber composed of double-walled carbon nanotube yarn and metal-organic frameworks (MOFs). The team heat-treated the MOFs and transformed them into MOF-derived carbon to maximize energy storage capabilities while retaining their mechanical properties. The hybrid fibers with tunable properties and mechanical robustness functioned under a variety of mechanical deformation conditions for the resulting super-strong fiber to deliver sufficient power to activate light emitting diodes while suspending a weight of 10 Kg.

A great demand exists at present to develop next-generation portable and flexible electronics including roll-up displays and wearable devices with lightweight, flexible energy storage to sustain high power and energy densities. Fiber-type solid-state supercapacitors are important to realize next-generation energy storage due to their ease of handling and metamorphosis. Researchers have explored methods including enlarged charge storage sites with porous materials for charge transport via high conductivity along with pathway construction and fiber strengthening through reinforcement, with robust materials to form a fiber-type platform. These developments have only indicated modest improvements of performance and the development of integrated fibers remains an important goal to store a large amount of charge. The material must in turn exhibit high conductivity and superior mechanical properties to form next-generation electronics. In this work, Wan Na et al. developed an ‘all-in-one’ fiber with charge storage sites based on a heterogenous hybrid composite between carbon nanotube yarn and metal organic frameworks to maintain a high specific surface area and superior mechanical properties with excellent electrical conductivity.

During the experiments, the hydrothermal reaction allowed the growth of bulky metal-organic-frameworks (MOFs) on the surface of double-walled carbon nanotube yarn (DWNTY). Using heat treatment pyrolysis, the team next converted the metal organic frameworks (MOFs) to produce MOF-derived carbons (MDCs) without compromising electrical and mechanical properties of the double-walled carbon nanotube product. The hybrid fiber maintained controlled thickness, tunable properties, and MOF-derived carbon loading to show a high energy density of 7.54 mWh cm-3 at a power density of 190.94 mW cm-3 to feature high deformability and deliver sufficient power to switch on light-emitting diode (LED) bulbs even under a weight load of 10 kg. The team developed hybrid composites by directly spinning the DWNTs and combined them into a single fiber with a thickness in the range of tens of micrometers. The structural design of the setup directed external exposure of the highly porous carbons to function as a high-energy power storage system with superior mechanical and electrical conductivity.

Wan Na et al. produced DWNTY (double-walled carbon nanotube yarn) based on a floating catalyst-based synthesis process by directly spinning the nanotube yarn to fabricate a hybrid composite. They immersed the as-produced construct in acetone to increase the density and strengthen the product. A DWNTY with a diameter of 15 µm contained thousands of individual DWNTs with a diameter of 5 nm as seen with optical microscopy, scanning electron microscopy (SEM) and transmission electron microscopy (TEM) images. The scientists then used Raman spectroscopy and thermogravimetric analyses to confirm high crystallinity and purity of the product alongside high levels of integration. The resulting hybrid fiber formed a basic component for next-generation fiber-based energy storage systems. The team then directly carbonized the hybrid up to 900 Celsius to provide superior electrical conductivity and microporosity. The versatile approach allowed controlled thickness of DWNTY with a modulated density of MOFs on the DWNTY surface.

Regulating the interface of hybrid composites for high deformability

To promote stronger interfacial bonds, Wan Na et al. introduced functional groups onto the surface of DWNTY and changed the ligands used for MOF synthesis to induce additional intermolecular interactions. Using X-ray photoemission spectroscopy and Fourier Transform Infrared spectra, the team introduced carboxylic groups onto the surface of nanotube yarn through diazotization using the p-aminobenzoic acid, while maintaining the original properties of the construct (which they labeled as mDWNTY). Using X-ray diffraction patterns, Wan Na et al. confirmed the functionalization of the yarn surface without changing its graphitic structure. They then replaced the organic ligand with a ligand containing an amine group (labeled IRMOF-3) to induce additional interactions with the carboxylic groups newly introduced to the double-walled carbon nanotube yarn surface. The team modeled the effect of interface modification on interfacial strength between the materials (yarn and metal-organic frameworks) to show the effectiveness of interfacial modification.

The team hypothesized on improving the storage performance of the devices by developing thickened fibers with porous materials. And accomplished this by thickening the construct by combining 100 fibers, then grew ligands containing amine groups on top of that in the presence of precursor solutions. The team then carbonized the amine groups to form yarn that could withstand various deformations to design fiber and textile supercapacitors. During tensile tests, they noted preserved constructs, even after 500 cycles of repeated bending with an undisputed electrical pathway network to show the superiority of hybrid composite fibers. Further results validated the feasible function of the all-solid state supercapacitor. Further characterization studies highlighted the capacitance of the supercapacitors to confirm the mechanical robustness of the all-solid-state supercapacitors under various deformation conditions. Even after repeated bending, the product showed capacitance retention of 88 percent after 500 cycles to validate its superior flexibility. The energy storage performance remained intact at various bending angles to show mechanical reliability of the supercapacitor for fiber processing technologies. In this way, You Wan Na and colleagues showed a new class of jeweled-necklace-like hybrid composite fibers made of DWNTY coated with MOF beads as an all-in-one fiber-type all-solid-state supercapacitor. The study established a straightforward strategy to impart mechanical robustness on hybrid composite fibers for energy storage reliability to form high-performance fiber-type supercapacitors.