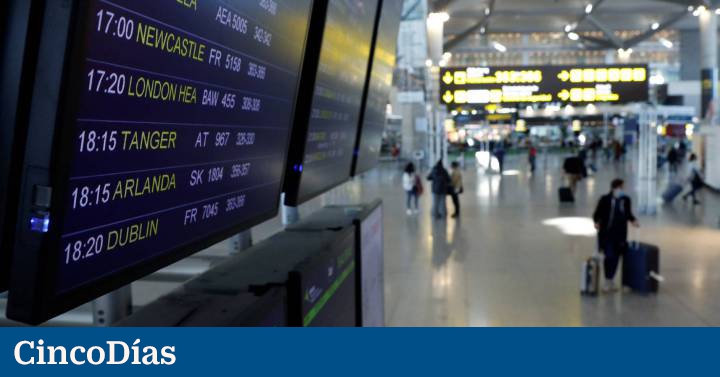 The income statement of Aena at the end of the first quarter continues to end with losses, of €96.4 millionstill affected by the throes of the pandemic and now also by the energy costs. But this adverse net result is recovering from 241 million in red as of March 31, 2021.

Air traffic in Spain has shot up 360%, up to 37.9 million travelers in the quarterwhich represents a recovery rate of almost 72% compared to the comparable period in 2019. National traffic grew by 198%, while international traffic, at its lowest point a year ago, shot up almost 600%.

Taking into account the management of airports abroad, London-Luton and the six from Brazil, Aena declares a passenger figure of 43.4 million and a positive evolution of 280%. These assets contribute 88 million in revenue, 247% more, and 26.3 million in EBITDA, 3,250% above the figure for a year ago. With the slowest reactivation of aviation in the United Kingdom, Luton now improves 508% in users, but its recovery rate compared to 2019 is still 51%. Brazilian assets, for their part, are already at 94% of the reported traffic as of March 2019 after an increase of 26% in the recently concluded quarter.

The improvement in the health situation helps to reactivate a business that has been severely punished for two years, but in the case of Aena it continues to be hampered by the reduction in the minimum rental income for commercial spaces, ordered by the Congress of Deputies last september (Law 13/2021 in its Seventh Final Provision). The adjustment in income for this issue in the first quarter was 75 million.

The departure announced yesterday of the secretary of the council and general secretary of the company, Juan Carlos Alfonso, occurs in the midst of the legal battle with the main tenants of Aena’s stores and restaurants at airports. The company seeks that a judge, in one of the more than one hundred open cases, urge the question of unconstitutionality against the regulation by law of the adjustment in rents from a single company. Alfonso, who will be replaced on May 3 by Elena Roldan, has led the company’s actions before the courts “with good judgment and courage”, the president of Aena, Maurici Lucena, said yesterday. The company, which spoke of cessation before the CNMV, says that it is taking advantage of the “turning point” that the recovery of activity represents to introduce a “convenient” change after a long cycle, especially after years as hard as the last two that we have gone through.

One of the points of conflict with the airlines, that of the computation of the costs caused by the Covid in the ratesis settled at the beginning of the year with new expenses for 25.6 million, above the 19.2 million in the first quarter of 2021. Aena reiterates that it will have the right to recover that figure by virtue of Royal Decree-Law 21/2020. An extreme that does not deny the Airline Association (ALA), which demands that the cost be borne by the State. The costs between March 2020 and September 2021, which have increased the 2022 rates, totaled 150 million.

Operating expenses, of 807 million (579 million of operating expenses, with an increase of 30.6%), already reflect the greater activity in the terminals. But the 19.7% increase compared to the first quarter of 2021 is also due to a interannual rise in the electricity bill of 46.7 million. Aena has launched a photovoltaic plan with expectations of reaching self-consumption and be carbon neutral by 2026. Its budget is 350 million.

The group’s ebitda was 72.6 million (14 million for Luton and 9 million for Brazil), which becomes one of the main signs of revival. A year ago the airport manager reported a negative figure of 121 million euros. In this way, the margin goes from -34% to 10.6%, still far from the levels achieved before the pandemic. The margin in the aeronautical business continues to be negative (-7.8%), while the commercial one is 44%.

The other positive symptom highlighted by Aena this morning is the cash flow generated by operating activities: it stands at 343 million compared to 107 million with a negative sign as of March last year.

The company has commitments in 2022 investments for 535 million in the Spanish network of airports, of which it has already executed 73 million. The amount of investments paid is 259 million (236 million in Spain).

Cash availability, taking credit lines into account, reaches 2,096 million. Added to this are the 900 million in the Euro Commercial Paper (ECP) program that are fully available.