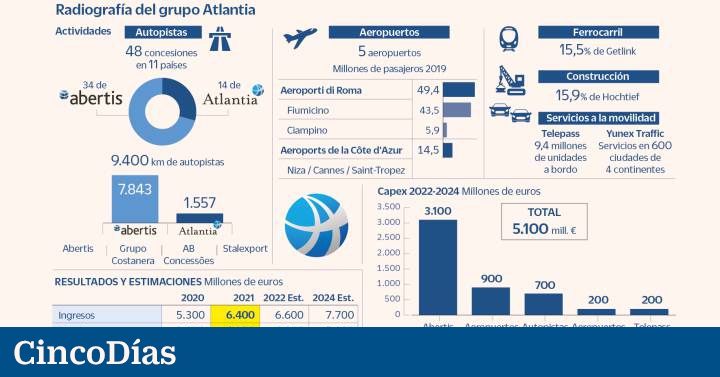 Yesterday’s door slam given by the family Benetton to the fund plan GIP and Brookfieldto which was added DHWto buy Atlantia and that the Spanish group will stay with the motorway division, forces the Spanish to reformulate its plan. The Edizione holding company, through which the Benettons own 33.1% of Atlantia, informed Consob that its participation has a “strategic nature” and intends to “continue contributing to its sustainable development”. For the first shareholder, it is essential to “maintain the Italian roots of the company”, which bases 76% of its income and 84% of its EBITDA on the Spanish company Abertis.

Financial sources explain that ACS has yet to launch a hostile takeover bid with its partners on a company that capitalizes 16,760 million and carries 30,000 million euros of net financial debt. But on that path it would enter into a battle with Blackstone, which has come to the aid of the Benetton family, in addition to having, predictably, strong opposition from the Italian Government. Another way is to try to get closer to Edizione and Blackstone to maintain peace in Abertis, a firm that ACS shares with Atlantia, and continue to strengthen it.

Mutism settled yesterday in the ACS environment while Florentino Pérez and his closest team analyzed their possibilities after the rejection statement published by Edizione in the middle of the afternoon.

The first shareholder of Atlantia acknowledged that he is in negotiations with the aforementioned investment giant Blackstone. It is interpreted that to have him as a partner in a company that has a 48% free float and even to exclude it from the trading floor, or to launch a counter offer in the event of a hostile rapprochement between GIP and Brookfield and ACS. The Benetton holding company did not offer details in this regard. But it did affect that the offer “which has also attracted the interest of ACS” has not been requested.

The bid for the funds, non-binding, arrived in Rome on March 30. Edizione did not mention ACS yesterday as a bidding party, but as a possible buyer of most highways. A version that is in line with what the Madrid group communicated to the market on Wednesday: its exclusivity agreement with the two North American funds was to keep control of the Atlantia highway business.

Expressing outright opposition to a spin-off of Atlantia’s assets, Edizione replied in a statement that a possible divestment of Abertis, and of other highway assets, would lead to a “disintegration” of the group. The largest actor in the transalpine country in the concession sector would be left with the airport division, with the Romans Fiumicino and Ciampinoand the French of Nice, Cannes and Saint Tropezin addition to the business represented by Telepass and the 15.9% stake in Hochtief and in the Eurotunnel rail operator in the English Channel, Getlink.

If one of the keys to the success of the ACS offensive was to convince the Benettons, with whom Abertis shares, the owners of Atlantia assured yesterday that their strategic vision is to “preserve the integrity of the group and give greater impetus to its activities”.

The Benetton family has just appointed Alessandro Benetton last January as president of Edizione. At that time, the new executive described the stay in Atlantia as “strategic”. In fact, the holding company reinforced its position in the capital from just over 30% to 33.1% with the forced divestment, valued at 8,000 million euros, in the Italian motorway subsidiary Autostrade. The latter went to the public CDP and the Blackstone and Macquarie funds.

conversations. The GIP and Brookfield funds confirmed yesterday that they have maintained contacts during the month of March with representatives of Edizione. The meetings were held on March 3 and 23, and on the 30th of last month a non-binding offer was presented by Atlantia to which is the main shareholder of the infrastructure firm. In parallel, the Benettons have been seeking an agreement with Blackstone to strengthen themselves and be able to contest a possible takeover bid.

GIP vs. Blackstone. Those who may be rivals for control of Atlantia, GIP and Blackstone, are loading ammunition. The former is bringing together investors to create the world’s largest infrastructure fund. And Blackstone reopened in 2021 one of its funds specialized in the sector. The latter is part of the consortium that was formed last year with Austostrade, a subsidiary of Atlantia with 3,000 kilometers of toll roads in Italy.