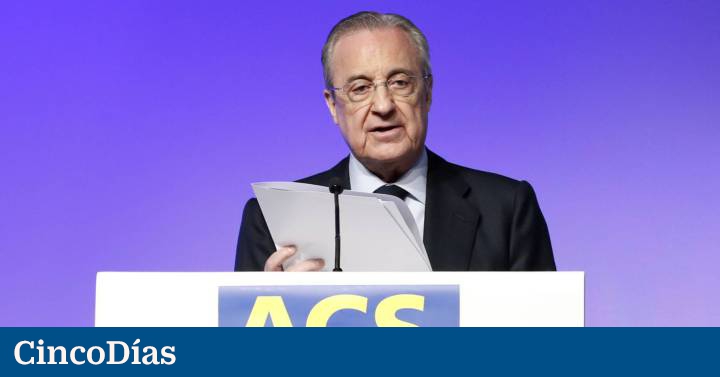 The sum of extraordinary results for 2,325 million in 2021, due to the sale of the Industrial Services area to Vinci for 5,580 million, has triggered the net profit of ACS to 3,045 million. Before this impulse, the group chaired by Florentino Pérez obtained 720 million euros of ordinary net profita figure that improves by 33% that reached a year ago.

The challenge now is to reinvest the funds, for which ACS is looking for opportunities in the highway and renewable energy businesses. Its president intervenes tomorrow before investors and analysts, an appointment in which he could offer some clue about the future of the company and about the reorganization that is coming. For now, the German subsidiary Hochtief has launched a takeover bid for its Australian firm Cimic to get it out of the bag.

From the results, the improvement in the traffic of the highways of Abertisafter the crisis experienced in 2020. The contribution of the concessionaire in the EBITDA of DHW has improved by 188 million euros and the group’s net profit by 152 million euros.

After the historic sale of the industrial business, ACS maintains a portfolio of renewable energy and water assets valued at more than 1,000 million

All business areas have closed the year with black numbers. concessions declares a profit of 167 million (117 million for Abertis and 50 million for Iridium); the area of Building it has grown by 3.8%, contributing 273 million euros; Industrial servicesprior to its sale to Vincidelivered 328 million euros, and the area of Services (Clece) obtained a net profit of 29 million.

ACS has reiterated this afternoon that after the historic sale of the business headed by Cobrawhich leaves capital gains of just over 2,900 million, maintains a portfolio of renewable energy and water assets valued at more than 1,000 million euros.

Other non-recurring results include the provisions related to the reassessment of operational risks for a value of 479 million and the losses caused in Hochtief due to the unfavorable arbitration in Chile, for a value of 102 million.

Abertis declares a jump in average traffic of 21% compared to 2020, showing in December levels equal to or higher than those of 2019

The revenues of this infrastructure giant totaled 27,837 million, in line with those of 2020. Production improved by 8.8% in the second half compared to the first, confirming the recovery trend after the recession caused by the pandemic. By geographical area, 59% of sales were obtained in North America, 19% in Australia, 18% contributed by Europe, 3% harvested in Asia and South America delivers the remaining 1%. The United States, Australia, Spain, Canada and Germany contribute 92% of total sales.

Margin under construction close to 5%

Construction contributes 25,879 million euros in sales (94% abroad), with a decrease of 0.7% due to the exchange rate of the US dollar. Activity stands out in the Asia-Pacific region due to the reactivation of pending projects and the start of new ones. Construction sales in Spain (5.5% of the total) increased by 2.8%. The construction portfolio is 64,379 million (96% international).

The group’s construction companies added an EBITDA of 1,275 million, with a margin on sales of 4.9%. Net profit, with the aforementioned 273 million, grew by 3.8%.

In the Concessions business, Abertis reports a jump in average traffic of 21% compared to 2020, showing positive traffic trends in December, with levels equal to or higher than 2019. His contribution to the net profit of ACS was 117 million euros, compared to 35 million in red the previous year. Iridium, meanwhile, earned €50 million, driven by asset turnover such as the Toledo Hospital concession or the Baixo Alentejo highway.

In Industrial Services, revenues were 230 million once the part transferred to Vinci had been deconsolidated. The ordinary net profit of the division reached 328 million euros in 2021, including the contribution of the entire division until the closing of the sale operation at the end of December.

The Citizen Services area (Clece) obtained sales of 1,643 million euros, increasing by 5.7% compared to the same period of the previous year. The recovery occurs after the temporary stoppage in the previous year of a good part of social services due to the state of alarm.

The gross operating profit of the Services area was 88 million euros, recovering the operating margins prior to the health crisis. The net result of 29 million euros represents an increase of 10 million compared to 2020. The current backlog in this area amounts to 2,883 million euros, equivalent to 21 months of activity.

ACS investments in infrastructure projects, renewable energy and services throughout 2021 have reached 353 million euros. Hochtief took the cake with 152 million, for the 135 million invested in energy projects outside the Industrial Services sales perimeter.

The divestments of the group, apart from the sale of the industrial business, were 415 million euros. In Brazil, 100 million were raised with the sale of transmission lines, while Iridium and hochtief placed concession assets for 137 million.