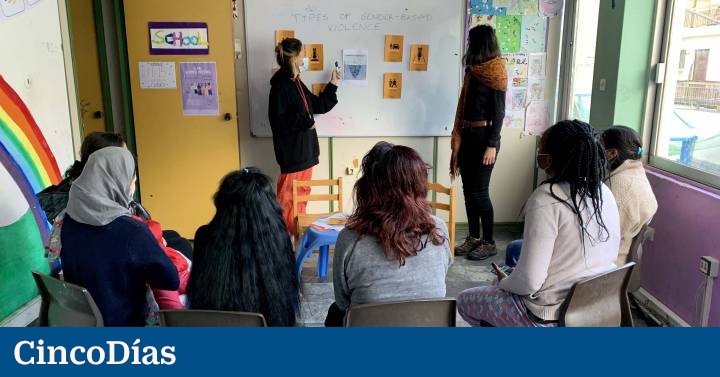 The volunteer project building bridgespromoted by students from different Spanish universities in collaboration with the Galician NGO AIRE (Comprehensive Emergency Rescue Association), has obtained first place in the ninth edition of the University Volunteer Awards. These awards, granted by the Mutua Madrileña Foundationaim to recognize and give visibility to the solidarity work of students, as well as to help financially to promote or sustain the volunteer projects in which they collaborate.

Building bridges provides Comprehensive support for refugee women who are in the final stretch of their pregnancy or with nursing minors. These women live together with their families at the Elna Maternity Center, a reception center set up in 2018 in Athens by a consortium of NGOs of which AIRE is a part. In Elna, they are provided with accommodation and food, as well as legal, educational, psychosocial and health support until they can obtain political asylum and a job to survive.

Marushia Monroy is one of these volunteers, who after finishing his studies in Audiovisual Communication joined the project. “Each student contributes her grain of sand. For example, people with health studies are in charge of the clinic; those who have studied social work help with resumes; the teachers carry out the school’s project… so each one tries to contribute what they can”, explains Marushia, who has made the presentation video of the winners of the IX Volunteer Awards and has taken the social networks, in addition to teaching tutoring classes for schoolchildren.

“The reinforcement classes are given in English, but many of us volunteers attend Greek classes to be able to improve, because the children are enrolled in the Greek educational system,” says Marushia, who acknowledges that mastering French (it is her mother’s language ) is also very useful for getting around there. Currently, about 90 people live in the center (half of them minors) from countries in conflict such as Afghanistan, Syria, Iran and the Democratic Republic of the Congo.

This project has been recognized among a total of 78 applications submitted in which nearly 2,000 students from 57 universities and 73 NGOs have participated. In addition to this project, which has received a grant of 10,000 euros, the Fundación Mutua Madrileña has awarded another five volunteer initiatives with 5,000 euros each:

–Living together changes lives is an initiative in which three students from the Complutense, Francisco de Vitoria and Madrid Polytechnic universities participate, in collaboration with the Hogares Lázaro Foundation, which promotes the coexistence of young people with homeless people who have been rescued from the street. In addition to providing shelter and maintenance, the beneficiaries acquire social and work skills.

–Volunteer against the digital divide is a project launched by students from the Complutense, Rey Juan Carlos and Saint Louis University Madrid, together with the Sanders Foundation, which tries to provide digital skills to children at risk of social exclusion. The training is done with discarded computer equipment that, previously, the volunteers have been in charge of reconditioning.

–Capicua It is promoted by students from the universities of Seville, Carlos III and Autonomous University of Madrid, with the support of the Asociación Sacapuntas. The project takes place in the Cañada Real neighborhood of Madrid, where volunteers provide school and leisure support to minors, with the aim of improving their education and avoiding social isolation.

–Talha: mobile psychomotricity room It is promoted by 17 students from the University of Zaragoza, in collaboration with the Saharawi Lefrig Collective Youth Association. The project tries to provide physiotherapeutic rehabilitation to people with some type of functional disability who live in the Saharawi refugee camps of Tindouf (Algeria). or

–Together walking towards inclusion is an initiative developed by 60 students from Cunef and the Oxiria Foundation, through which university students carry out activities to reinforce academics, sports and support people with functional diversity. Both groups, students and beneficiaries, study at the Cunef campus and these moments of exchange take place during breaks.

Maushia assures that the prize money “will be a boost to be able to continue with the project, in order to obtain a large permanent donation”, because the flow of refugees unfortunately does not stop.

Spanish universities promoted during the 2020-2021 academic year more than 1,800 volunteer initiatives in which around 10,500 students collaborated, according to the IX Study on university volunteering carried out by the Mutua Madrileña Foundation.

This study reflects some changes in university volunteering motivated by the coronavirus pandemic. Universities have centralized their solidarity projects in our country. In this way, nine out of ten initiatives have taken place in the local environment, especially in areas related to care for vulnerable children, groups at risk of social exclusion and people with functional diversity.

It is also observed a greater duration in the continuity of the projects. Thus, 86% of the programs carried out through the university last for more than three months, 10% more than the previous year, which indicates a commitment of the students with charitable causes in the medium and long term. .

The students of the branch of health sciences were the most active during the past academic year, unseating students of social and legal sciences from that first place.

The profile of the volunteers is still mostly female, with 72% representativeness.