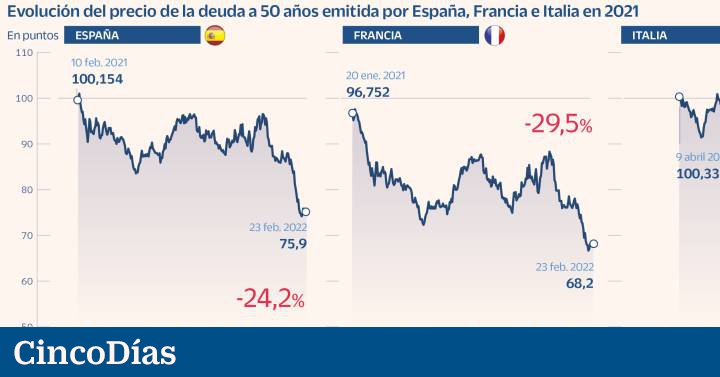 With inflation in the eurozone revalidating records and that in the US at 40-year highs, investors are preparing for monetary normalization, an idea that has been reinforced by the rise in raw materials and the greater forcefulness shown by the Reserve Federal and the ECB with price stability. Not even geopolitical instability has been enough for debt yields to stop climbing.

While yields pick up, the price, which evolves inversely proportionally, falls. This movement has also been reinforced by the strategy of betting on short durations as shield against the expectation of higher rates. In this context, long-term bonds are the most damaged assets.

A good example of this current is the 50-year bond that Spain placed in February 2021, the second operation at this term since its debut in 2016. Since its entry into circulation, this reference has accumulated losses of 24.2% while the profitability It goes from 1.45%, the historical minimum for this term, to the current 2.26%. Although international organizations such as the OECD or the European Commission continue to see Spain as one of the economies that will take the longest to recover pre-Covid levels, this time the punishment suffered by the debt is not due to issues related to the fundamentals and the financial sustainability. Losses are being a general trend in the eurozone, accentuated by the withdrawal of monetary stimuli. Although liquidity remains high, the reduction in debt purchases and the expectation that by the end of the year Christine Lagarde will end five consecutive exercises of zero interest rates have led investors to unwind their positions in fixed income and with a greater incidence in longer-term references.

In addition to Spain, last year France, Italy and Belgium took advantage of low prices to diversify their issues and place 17,000 million in 50-year debt, a term that attracted the interest of both issuers and buyers. The former saw in these references a way to lengthen the average life of debt and prepare for the rate hike, while the latter achieved juicier returns at a time when the volume of debt with negative rates set a record.

Like the Spanish one, these references have not been exempt from losses due to the rise in yields. Since its entry into circulation, the 50-year bond with which France raised 7,000 million has accumulated a depreciation of more than 29.5% while its profitability has gone from 0.5% to 1.38%. For its part, the Italian reference falls 15.2%, far from the 5% gains that it accumulated in the first half of last year, a period during which Italian assets were boosted by the landing of Mario Draghi at the head of the Executive. The appointment of the savior of the euro as prime minister helped restore some stability to Italian politics at a key moment for the receipt of Next Generation reconstruction funds. Now his continuity at the head of the Government is essential to continue advancing in the reforms and measures necessary to implement the arrival of the money.

Since its entry into circulation, the Belgian 50-year benchmark issued 12 months ago has never managed to post a profit. However, the initial losses are far from the 25.8% currently recorded.

Although investors have begun to price in an aggressive normalization of monetary policy, experts say that central banks will be very cautious to avoid a deterioration in the economy. Gonzalo Sánchez, director of investments at Gesconsult, points out that the rise in prices is due more to problems related to supply than to questions of demand. In this scenario, central banks have little room for action.

Debut. Last year, Spain and Italy carried out the first green debt issues, two operations with which they raised 13,500 million at 20 and 24 years, respectively. The shield provided by the green label and the good reception they had among investors (joint demand exceeded 140,000 million) has not been enough to escape the losses. Since its entry into circulation, the Spanish reference has accumulated a loss of 11.2%, a decrease that in the case of Italy reaches 14.5%.