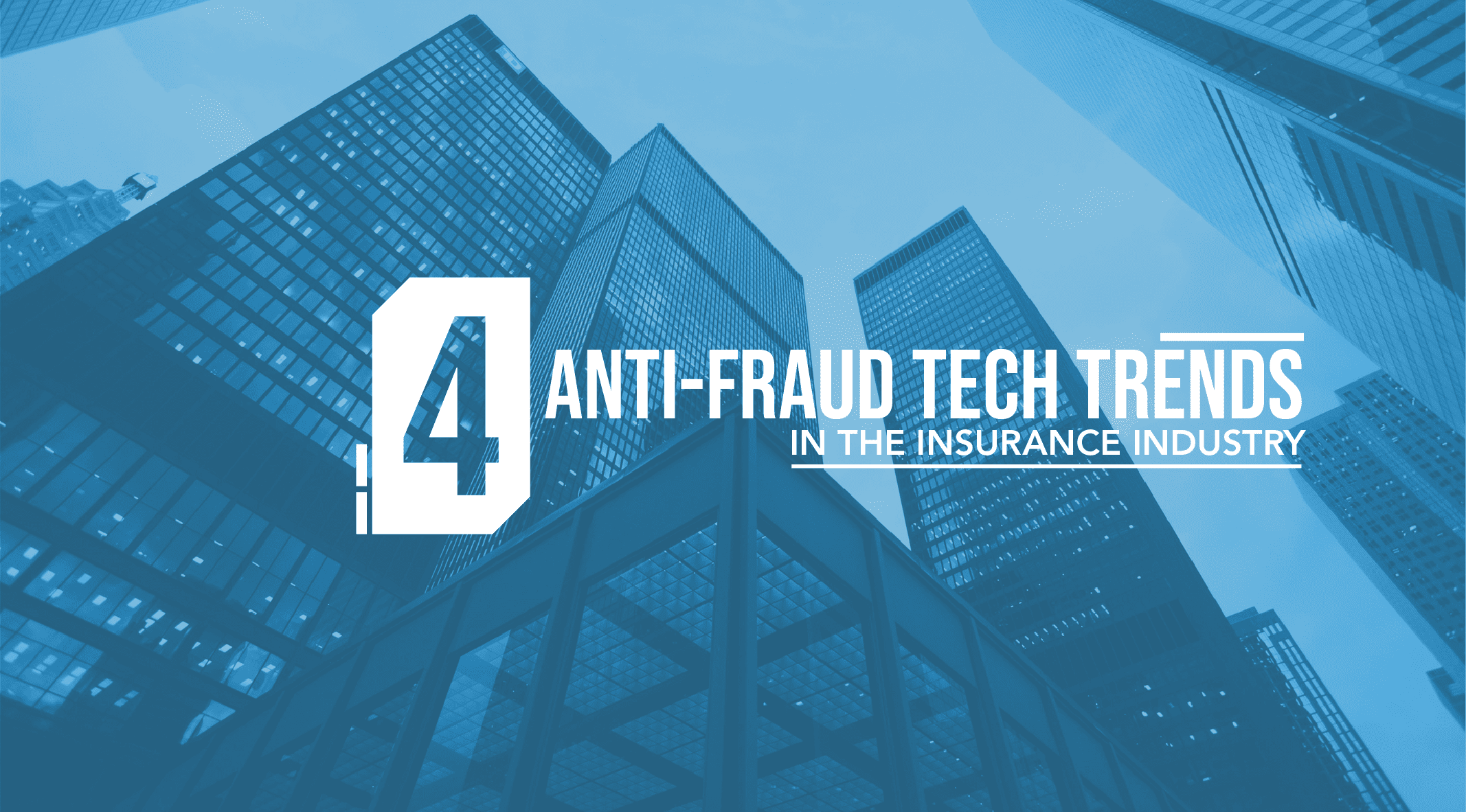 Since the start of the COVID-19 pandemic, fraud and suspicious activity have been on the rise. In the insurance industry, fraud attempts have become increasingly sophisticated, forcing insurance companies to embrace technology and set out anti-fraud technology to identify suspicious activities in a more proactive manner.

In their latest 2021 State of Insurance Fraud Technology Study, the Coalition Against Insurance Fraud and SAS look at the state of anti-fraud tech adoption in the insurance industry, delving into insurers’ fraud detection strategies and planned areas for expansion.

The research found that as fraud continues to rise in the industry, adoption of anti-fraud tech in insurance is surging. Out of 100 insurance companies surveyed, 80% indicated using predictive modeling to detect fraud, up from 55% in 2018.

Adoption of text mining witnessed an even stronger growth, rising from 33% in 2018 to 65% in 2021. Text mining is the process of deriving high-quality information from different written resources.

Image-based fraud prevention techniques are also becoming more popular, with over 30% of insurers reporting incorporating photo recognition/analytics in their fraud prevention efforts in 2021.

These technologies allow insurers to determine whether a photo of a claimed damage is real, has been digitally altered, or has been submitted previously on other claims, avoiding thus the need for in-person inspections and ultimately helping save costs.

Concerning fraud detection, does your system incorporate any of the following?, Source: 2021 State of Insurance Fraud Technology Study, Coalition Against Insurance Fraud and SAS

Rising use of anti-fraud tech is further evidenced by the growing proportion of referrals coming from automated fraud detection solutions, showcasing insurers’ growing reliance on anti-fraud tech. In 2018, that number stood at 20%. In 2021, that figure grew to 30%.

Data is the very core of fraud detection: the more data an organization has, the more informed their decisions can be when assessing risk. Given the critical importance of data for a fraud management system to work effectively and accurately, insurers are now increasingly embracing new data sources.

While the study found that the most frequent data source relied upon continues to be internal data (100%), a rising proposition of insurers indicated using alternative data. In particular, unstructured data saw a significant rise in usage, surging from less than 50% of respondents indicating relying on this data source in 2018, against 81% in 2021.

Public records are another data source that saw a notable rise, increasing from about 60% in 2018 to now up to 79%. There is also a significant increase in the use of industry fraud alerts or watch list data, which rose from about 60% in 2018 to 88% in 2021, in addition to social media data, which were used by nearly half of insurers surveyed in 2021, against about 37% in 2018. 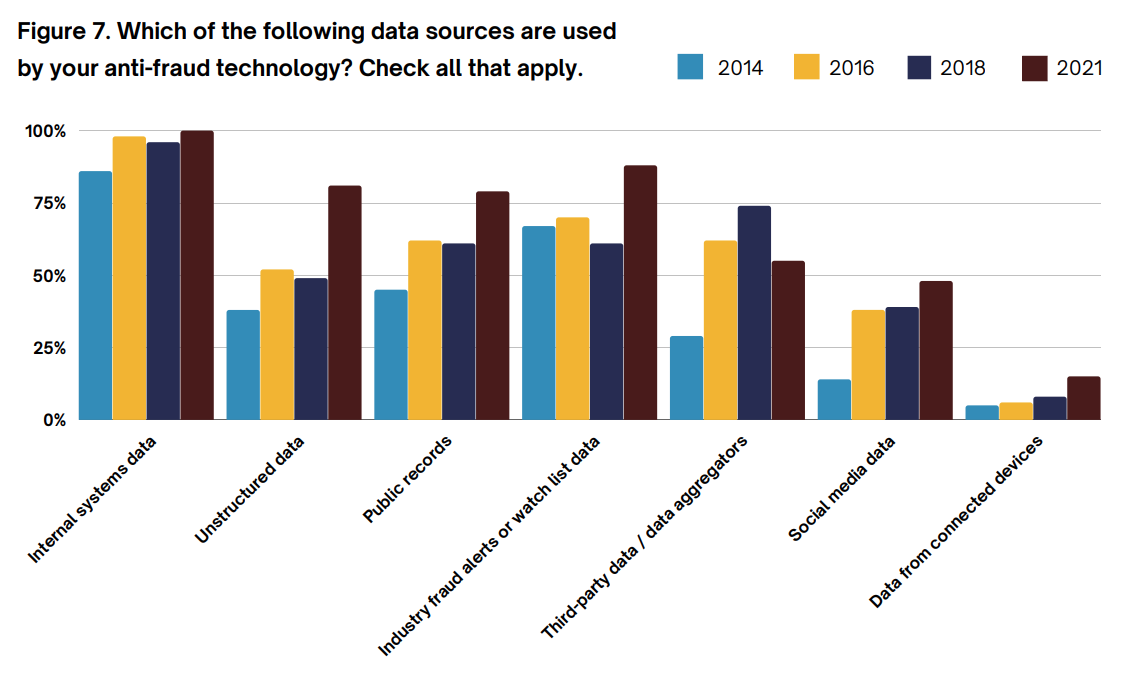 Which of the following data sources are used by your anti-fraud technology?, Source: 2021 State of Insurance Fraud Technology Study, Coalition Against Insurance Fraud and SAS

While technological advancements, including artificial intelligence (AI), geotargeting and automation, are bringing many benefits to the fight against fraud, adopting new technology also comes with challenges.

Among the biggest barriers in deploying fraud detection tech, insurers cited limited IT resources (68%), as well as data integration and poor data quality (64%) as the most significant implementation challenges in 2021.

Though these hurdles have historically been at the top of list, there is a slight decrease observed throughout the years, suggesting an improvement in both IT resources and data management. 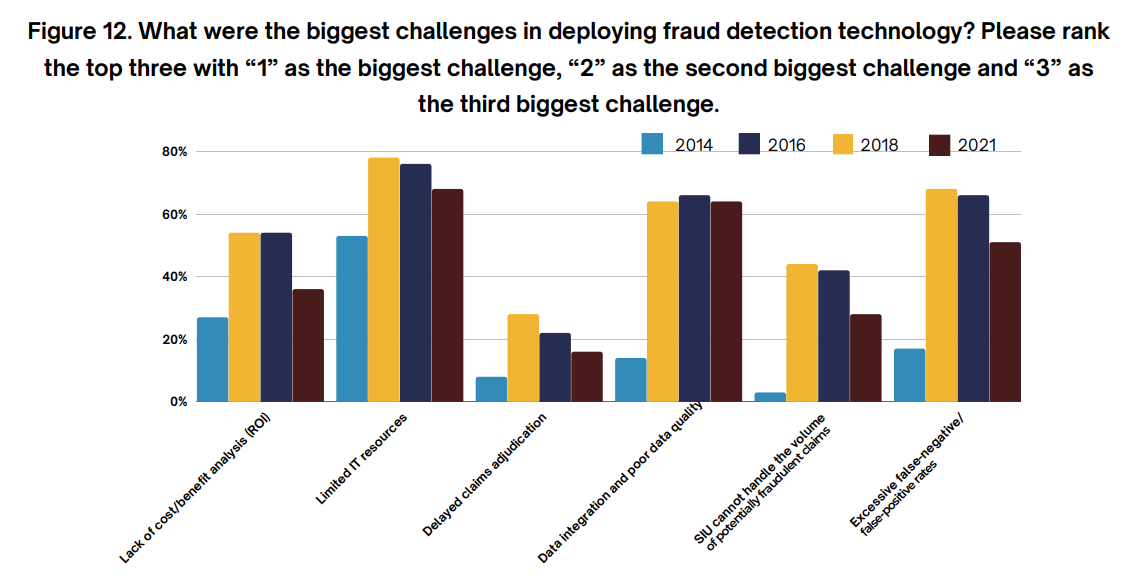 What were the biggest challenges in deploying fraud detection technology?, Source: 2021 State of Insurance Fraud Technology Study, Coalition Against Insurance Fraud and SAS

Budget and financial concerns also appear to be an obstacle for many organizations. 68% noted that their budget, as in previous years, will either remain flat or that there is no expectation of significant changes in funding for the next twelve months.

Tapping into the potential of advanced analytics

When asked about the technologies they were the most excited about, insurers showed eagerness in the advanced analytics space. 54% of respondents said they were considering investing in predictive modeling within the next 12 to 24 months, followed by automated red flags/business rules (41%), link analysis (39%), and AI and machine learning (ML) (28%).

Which of the following anti-fraud technologies are you considering investing in within the next 12 to 24 months?, Source: 2021 State of Insurance Fraud Technology Study, Coalition Against Insurance Fraud and SAS

Similar to results observed in 2018, insurers said the detection of claims fraud (71%), underwriting, or point-of-sale fraud/rate evasion (38%) and cyber fraud (23%) will be amongst the top investment areas for the next 12 to 24 months. Additionally, almost a third (31%) of respondents are looking to invest in identity verification/authentication technology.

In the US, the total cost of insurance fraud (non-health insurance) is estimated to be more than US$40 billion per year, according to the FBI. Recent report suggest that the proportion of fraud may represent as much as 22% of global insurance claims.

Tesla And The Future Of Electric Cars